Zara’s owner is having to shut stores again in the crucial run up to Christmas. The fashion retailer’s fast-growing online business may not patch the hole as well as might be hoped.

Spain-based
Inditex,
the world’s largest clothing retailer, said on Tuesday that sales over the three months through October fell 10% at constant exchange rates compared with the same period of 2019. The company had almost recovered to precrisis sales levels when the second wave struck. Markets like Spain and Ireland imposed tighter rules on nonessential retailers from mid-October. 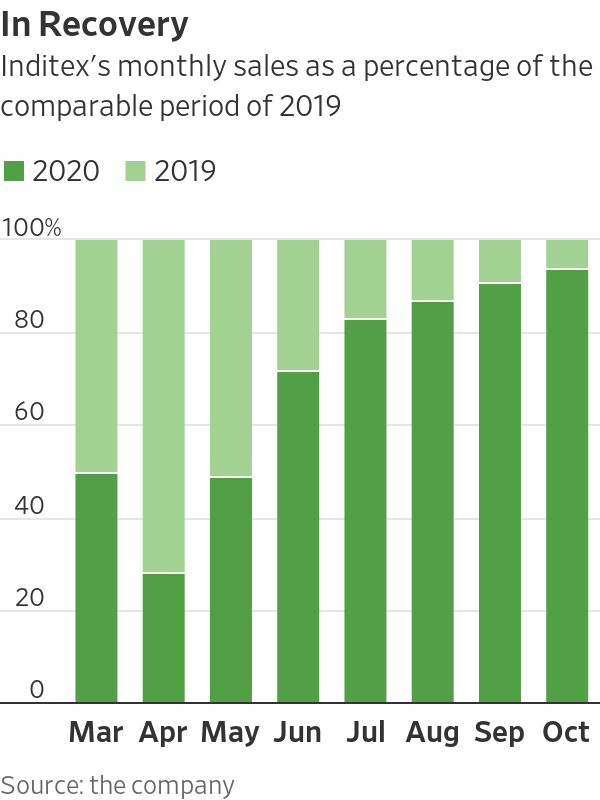 With new restrictions coming into force this week in parts of the U.K., Germany and the Netherlands, the question is whether Inditex’s digital business—which is much larger today than it was before the pandemic—can claw back lost store sales any faster than it did during the first wave of restrictions. The answer seems to be a qualified no based on the data so far.

During the worst of the lockdowns in April and May, three-quarters of Inditex’s world-wide shops were forced to close, leading to a 62% drop in sales. In November, 21% of the company’s locations were shut, and group sales fell 19%. That performance should have been stronger if the digital business was picking up the slack faster than during the first shutdowns, according to estimates of Inditex’s store-based sales by Bernstein analyst Aneesha Sherman.

The first word on what Wall Street is talking about.

There are a few explanations. Inditex’s digital sales have already grown by 75% in 2020. All those shoppers that were prepared to switch to buying online may have already done so. It is also likely that social distancing rules are lowering purchases in stores that remain open. The company’s digital arm isn’t big enough yet to offset weaker business in open locations as well as those that are closed completely.

In other respects, Inditex looks as impressive as usual. Inventory levels at the end of October were 11% lower than they were the same time last year. Tightly controlling stock means fewer clothes have to be sold at a discount, protecting profit margins. And net cash of €8.3 billion, equivalent to $10 billion, was a record high.

The retailer has done a great job of growing its online business this year, and will be much sharper digitally after the pandemic has passed. In the short term, though, it won’t be enough to protect the business from winter closures.

Heard on the Street

How will the pandemic affect America’s retailers? As states across the nation struggle to return to business, WSJ investigates the evolving retail landscape and how consumers might shop in a post-pandemic world.[object Object]

Write to Carol Ryan at carol.ryan@wsj.com