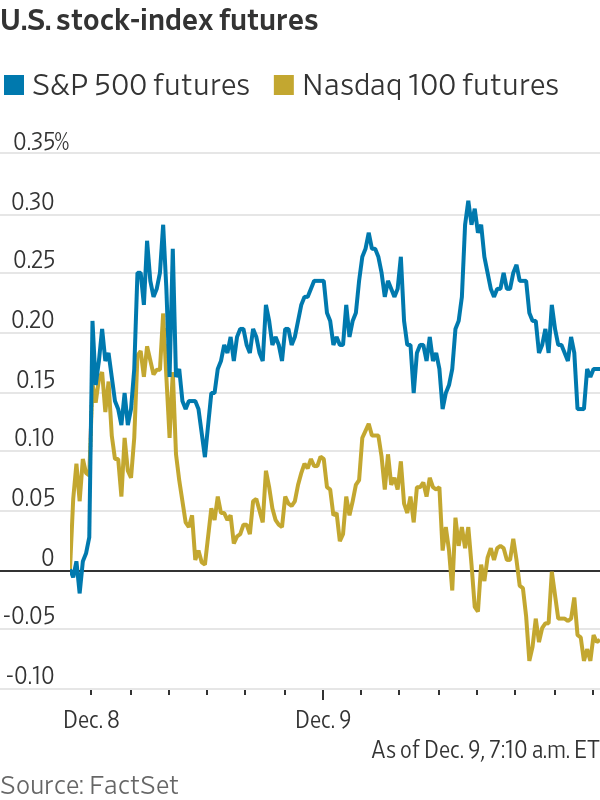 Futures tied to the S&P 500 ticked up 0.2% a day after the benchmark notched its 30th record close for this year. Nasdaq-100 futures were relatively flat, indicating that technology stocks may be subdued after the New York opening bell.

Investors are optimistic Congress will pass another coronavirus-relief package to bolster the economic recovery as rising infections prompt fresh restrictions on social and business activity. The Trump administration proposed a $916 billion-package on Tuesday after Democrats rejected an effort by Senate Majority Leader Mitch McConnell to narrow the scope of the bill.

“It does look to me like we are inching toward a deal,” said Hugh Gimber, a strategist at J.P. Morgan Asset Management. “The market reaction is highlighting what we’ve heard from central bankers: fiscal stimulus is the best way to support the economy and monetary policy can only do so much.”

Lawmakers appear to be facing pressure to offer aid to those who have been hardest hit by the pandemic as infection levels and hospitalizations rise across the country. The U.S. reported more than 215,000 new cases for Tuesday. Some states have introduced fresh restrictions, triggering concern that the economic recovery could falter in the winter months.

“That deterioration in the medical situation is putting more pressure to get something done,” Mr. Gimber said. “The market is more hopeful, with the election out of the way, that compromise will be easier to find.”

Ahead of the opening bell, shares of
FireEye
declined 13% after the cybersecurity firm said it was breached by nation-state hackers. The attack compromised the software tools used to test the defenses of thousands of customers.

The British pound gained 0.7% against the dollar and 0.6% against the euro. Investors are cautiously optimistic that the U.K. and European Union may strike a trade deal soon. British Prime Minister Boris Johnson and European Commission President

Ursula von der Leyen
are scheduled to talk face-to-face over dinner in Brussels.

“The harsh truth is that markets don’t have much really to go off, but we haven’t actually had a breakdown in talks,” said

Write to Caitlin Ostroff at caitlin.ostroff@wsj.com