Heart attack warning: Avoid these activities if you have a heart condition

Genesis Motor was eager to hitch itself to Tiger Woods — but probably not like this.

The golf legend’s Tuesday car crash has shone a spotlight on the fledgling luxury auto brand as it tries to raise its profile.

Genesis has rolled out five high-end models since parent company Hyundai launched it five years ago — including the GV80 SUV that Woods rolled over on an accident-prone road in suburban Los Angeles.

The unexpected attention could give the brand a much-needed boost at a time when it’s struggling with lagging sales, auto analysts tell The Post.

“I hate to use the [saying] ‘no such thing as bad publicity,’ but there’ll be that much more awareness of Genesis than there was a week ago,” said Karl Brauer, executive analyst at car-shopping website iSeeCars.com. “Any bad news can be devastating for 24 hours or 48 hours … but the increased awareness of Genesis will last a lot longer than that.”

Genesis was just a high-end model in Hyundai’s lineup before the South Korean car giant spun it out as a standalone brand in 2015.

The move was meant to help Hyundai compete with upscale labels from other Asian automakers, such as Toyota’s Lexus and Honda’s Acura, as well as luxury stalwarts like Mercedes-Benz, Audi and BMW, analysts said.

Genesis and its vehicles have won several industry accolades in the years since, including four consecutive No. 1 rankings among premium brands in JD Power’s Initial Quality Study.

But Genesis is still a tiny player in the US, where it’s also up against American-owned rivals such as Cadillac and Lincoln. Genesis only accounted for about 16,000 of the roughly 14.5 million cars sold in the states last year, according to CFRA Research analyst Garrett Nelson. Its 2020 sales had declined about 24 percent from the prior year through September, the last month for which Genesis released sales figures.

“It’s a lot smaller than the other luxury brands,” Nelson told The Post. “The luxury market’s very competitive. You have pretty much all of the automakers having at least one luxury brand.”

Genesis has tried to promote itself in recent years by sponsoring sporting events, including the Genesis Invitational golf tournament it hosted with Woods last week at LA’s Riviera Country Club.

The Genesis GV80 that Tiger Woods was driving at the time of his accident on display.Genesis

A smiling Woods was pictured two days before his crash with a Genesis GV80, the $48,900 SUV that the brand launched in October. The one Woods wrecked appeared to be courtesy car with Genesis’ logo emblazoned on the front door — making the incident hard for the company to ignore.

“I am heartbroken to hear that Tiger was in an accident this morning,” Genesis North America CEO Mark Del Rosso said in a statement posted to Twitter Tuesday evening. “Our thoughts and prayers are with him and his family.”

Woods suffered severe leg injuries but made it out alive — perhaps thanks to the GV80’s slew of safety features, including 10 air bags and “collision-avoidance assist” technology.

While the story might be different if Woods hadn’t survived, for now the crash could end up reassuring consumers about the safety of Genesis’ cars, according to analysts. 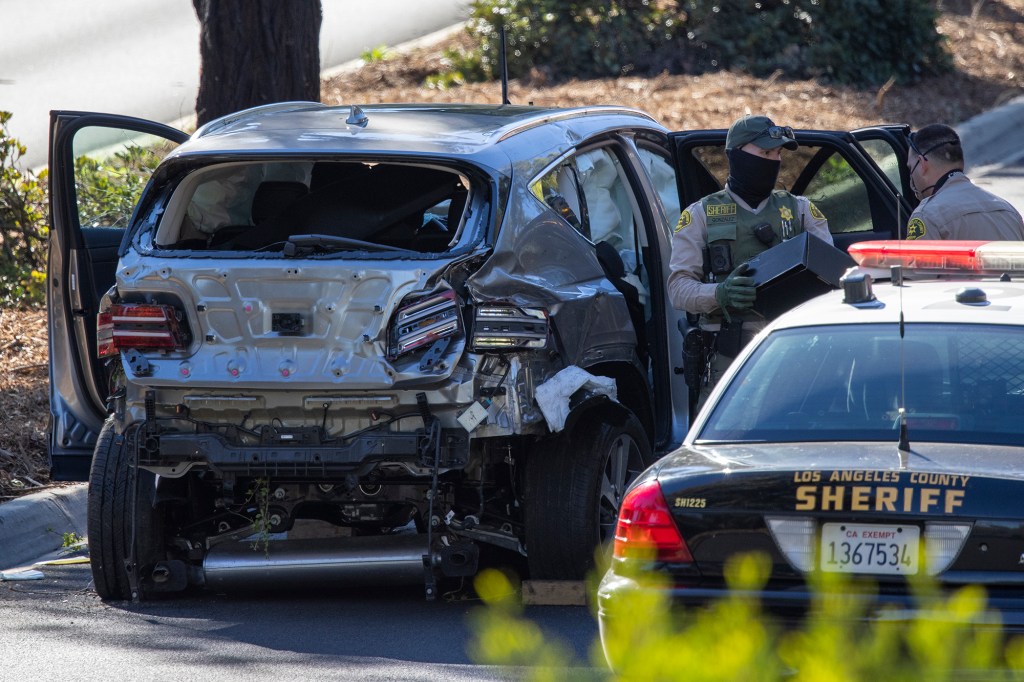 The Colorado geophysicist accused of beating and dragging a cop…

“It doesn’t appear that the car was at fault or there was any kind of equipment failure or anything like that,” Nelson said. “Conversely, it might just be the opposite, where people see the mangled vehicle and wonder how anyone could survive that and realize it’s because he was very well protected in that vehicle.”

“It wasn’t Cadillac’s fault when he did this before in an Escalade,” Brauer noted.

Woods suffered severe leg injuries but made it out alive — perhaps thanks to the GV80’s slew of safety features, including 10 air bags and “collision-avoidance assist” technology.Harry How/Getty Images

Broken Garage Door: Should You Fix Or...

Couple transform kitchen and lounge despite having...

Couple transform kitchen and lounge despite having three...

Heart attack warning: Avoid these activities if you...

Couple transform kitchen and lounge despite having three...

Heart attack warning: Avoid these activities if you...