A lesser-known stock index lost its biggest driver after
Tesla Inc.
joined the S&P 500, potentially undercutting the performance of the highflying benchmark and several exchange-traded funds that track it.

The S&P Completion Index tracks all U.S. stocks except those in the S&P 500. The index is typically associated with mid, small and microcap stocks that fail to meet certain criteria for inclusion in the S&P 500. The presence of Tesla, the biggest stock in the completion index and the sixth-largest publicly traded company in the U.S., was something of an anomaly.

The electric car maker’s 677% surge this year propelled the completion index up 31%, doubling the gain of the S&P 500 over the same period.

Tesla owed its massive weighting in the index to its size and the fact that it took about a decade from its public-market debut to meet guidelines for inclusion in the S&P 500. S&P Dow Jones Indices formally added Tesla to the S&P 500 at the end of Friday’s trading session, thereby removing the stock from the completion index. Trading of the reconstituted indexes started Monday.

“It was the odd stock out,” said

Ben Johnson,
director of global ETF research at Morningstar Inc. “It’s a version of the 1990s Chicago Bulls having Michael Jordan sitting on the bench for 40 minutes of a game and has everything to do with the unique way S&P Dow Jones Indices manages that benchmark [the S&P 500].”

The presence of Tesla in the completion index was a boon for the ETFs and mutual funds, including the Fidelity Extended Market Index Fund and the Vanguard Extended Market ETF, that tracked it. Together those funds account for more than $100 billion in assets and offered index investors an opportunity to profit off Tesla in their 401(k)s and other accounts ahead of its inclusion in the S&P 500.

The shuffling of Tesla from the completion index to the S&P 500 is already having a noticeable impact, as the electric car maker’s stock dropped 6.5% Monday. Fidelity’s extended market fund rose 0.2%, while Vanguard’s product added 0.7%. The S&P 500, which now houses Tesla, declined 0.4% on Tuesday, with the electric car maker accounting for more than a quarter of the loss.

Although the funds won’t enjoy any upside from Tesla shares going forward, its deletion will allow them to miss out on any further losses as well. Some analysts and investors expect Tesla shares to pull back following their massive run-up ahead of inclusion, similar to Yahoo Inc. whose market value peaked shortly after the tech giant joined the S&P 500 in 1999. A pullback in Tesla shares could potentially hurt the performance of the index investors who track the S&P 500 and missed out on all of Tesla’s gains this year. 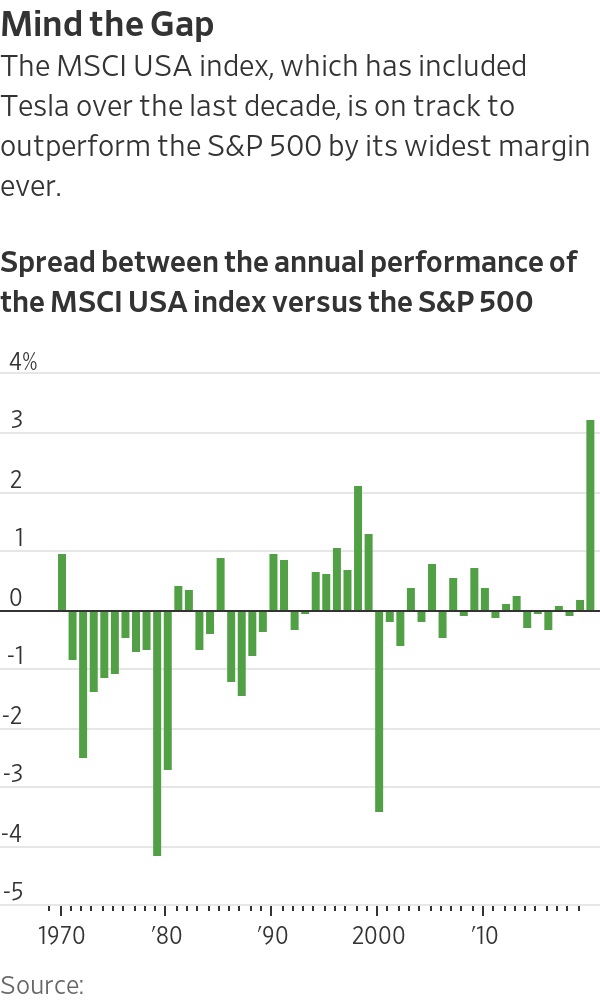 Other benchmarks that already included Tesla were able to ride the shares higher this year and will remain subject to the car maker’s swings going forward. The
MSCI
USA index, for example, is similar to the S&P 500 in that it tracks the performance of big U.S. companies. Tesla has been a member of that index over the past decade, thanks to its less stringent rules.


PHOTOS: A look at Tesla’s Twists and Turns on the Road to the S&P 500

“All this goes to show it’s important to understand the nuanced differences in index construction because they can have meaningful impacts on short-term performance, even on indexes that, at first blush, seem to be tracking similar benchmarks,” Mr. Johnson said.

What does Tesla’s entry into the S&P 500 mean for investors? Join the conversation below.

Elon Musk’s optimism and affinity for grandiose claims that may have once undercut his credibility may have now helped propel him to become the world’s second richest person. WSJ takes a look at how he managed to succeed amid the pandemic. Photo: Britta Pedersen/Zuma Press[object Object]