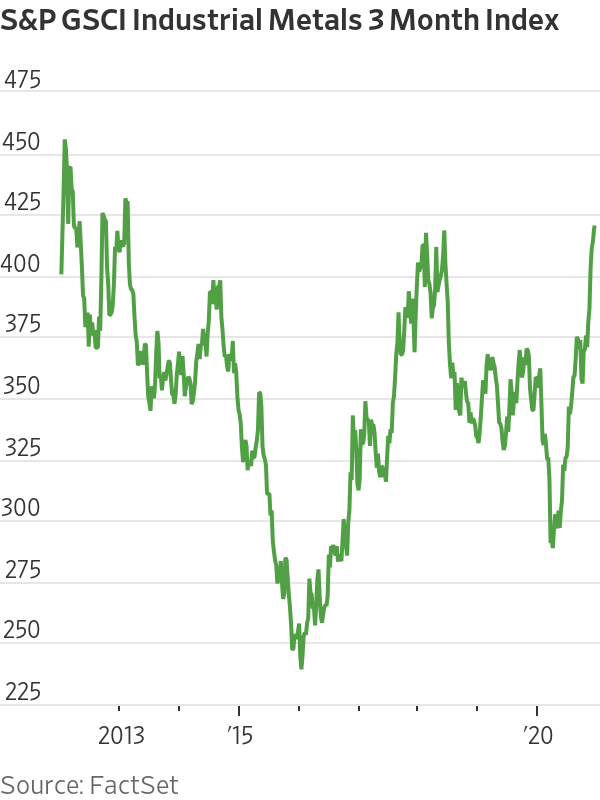 China’s real-estate developers contributed significantly to its recovery this year, revving up sales and construction activity as the world’s second-largest economy began to shrug off the economic effects of the pandemic.

But it isn’t clear whether they will be able to repeat the same act next year. Markets that are sensitive to the conditions in the sector, especially industrial metals like steel and copper, may begin to reflect that.

Most listed real-estate developers breach at least one of three “red lines”—specific leverage ratios to avoid—which haven’t been officially announced, but which are repeatedly identified in state media. As of the end of the first half of 2020, only six major developers passed all three tests, according to
BNP Paribas.
Nine breached all three, among them Sunac and Evergrande, two of the country’s largest property firms.

In theory, where developers place on the redlines test will determine how much debt they can raise in the subsequent year. And without the ability to add leverage, their ability to buy the land required to finance local governments would be more limited. Analysts at Nomura expect land-sales revenue to rise by just 5% next year, down from 9% this year, the slowest increase in at least five years.

China’s real-estate market is, perhaps mercifully, almost entirely domestic. Aside from developers’ dollar bonds the sector’s creditors are overwhelmingly Chinese. There is therefore little risk of a chaotic spillover through international banks.

But there are some markets that will feel the impact of a slowdown in construction, industrial metals chief among them. The spot price for the S&P GSCI Industrial Metals 3 Month Forward Index is up around 18% this year, at an almost eight-year high.

There is one important caveat to the restraint on debt, according to Chinese state media: It excludes advance payments from buyers, which developers have increasingly relied on in recent years.

But if developers simply turn to ever-greater presales, that could exacerbate an existing problem: Developers start more projects than they complete each year, lengthening the amount of time between purchase and delivery for buyers. That raises the risk of leaving millions of buyers unsatisfied if major companies went under.

It is possible that the Chinese government simply bends in the face of these contradictions, and allows the developers more leeway on debt financing. But if it doesn’t, then the sector—and the wider Chinese economy—should begin to feel the squeeze in earnest next year.

Write to Mike Bird at Mike.Bird@wsj.com