The electric-car maker will be by far the largest firm by market value ever to join the S&P, the most widely tracked stock index. Tesla’s inclusion will prompt the dozens of index funds that track the S&P to seek to purchase tens of billions of dollars of stock at Friday’s closing price, in a bid to track the index as closely as possible. Because of the firm’s size and the volatility of its shares, Tesla’s addition may ripple through the market in additional, unpredictable ways, traders said.

A spokesman for S&P Dow Jones Indices, which oversees the S&P 500, said the company consulted with market participants and communicated the addition to the market “far in advance of typical index changes.”

Here are five things to watch:

Tesla’s addition to the S&P 500 coincides with quadruple witching, which occurs four times a year and refers to the day that options and futures on both indexes and stocks expire simultaneously. These heavy volumes will boost liquidity and will likely help smooth the addition of Tesla to the S&P, traders have said.

Tesla will be the sixth-biggest company in the index, worth $622 billion, after soaring almost 700% this year. RBC Capital Markets estimates that about 3% of the roughly $4.7 trillion in assets that passively track the S&P will trade Friday. That is more than triple the figure at the last S&P rebalancing in September.

Traders say the heavy activity could stoke big moves across the market, as shares of companies across the index will have to be bought and sold to accommodate Tesla’s roughly 1% index weighting. The real-estate investment trust
Apartment Investment & Management Co.
, for example, will be dropped from the index. RBC estimates shares of companies like
Xerox Holdings Corp.
,
Berkshire Hathaway Inc.
and
Intel Corp.
could face selling pressure, reflecting considerations such as index weightings and other factors.

Tesla’s ascension will also affect the S&P Completion Index, which tracks all U.S. stocks except those in the S&P 500. Other indexes such as the S&P 400 and S&P 600, which track midsize and small-cap companies, and the Nasdaq-100 will also readjust their holdings.

Index funds tracking the S&P 500 have a small window Friday to buy a lot of Tesla stock. If they end up with too much or too little, or can’t get the closing price, the difference will register as a so-called tracking error, reflecting the price gap between a fund’s purchases and those of the index it tracks. Fund managers don’t like those because they make it harder for them to match their benchmark.

Index funds are planning to do most, if not all, of their buying of Tesla at the close on Friday to match S&P’s price, several traders and investors said. But expectations of heavy demand may make that difficult, traders added. In recent weeks, some investors have questioned whether enough sellers will come to the table, given Tesla’s famously passionate fan base and the sheer amount of buying passive investors must do.

All this could stoke big swings in shares of Tesla. Exchange operator
Nasdaq Inc.,
where Tesla shares are listed, and regulators discussed increasing price limits on the stock to allow it to move more than the maximum 10% currently allowed before a pause in trading, said a person familiar with the matter. The limits haven’t been changed.

Elon Musk’s optimism and affinity for grandiose claims that may have once undercut his credibility may have now helped propel him to become the world’s second-richest person. WSJ takes a look at how he managed to succeed amid the pandemic. Photo: Britta Pedersen/Zuma Press[object Object]

Tesla’s addition stands to add to the importance of the closing auction that determines end-of-day prices for thousands of stocks. Nasdaq will accept so-called market-on-close orders throughout the day. At 3:50 p.m. EST the exchange operator will start disseminating information on market imbalances, or outsize demand to buy or sell Tesla. At that point, traders will step in, likely vaulting an already crazy day to new heights.

“A few minutes before the close, when the imbalance feeds come out, a ton of algos will start pairing off imbalances or positioning their trades,” said Shishir Gupta, global index strategist at RBC Capital Markets. 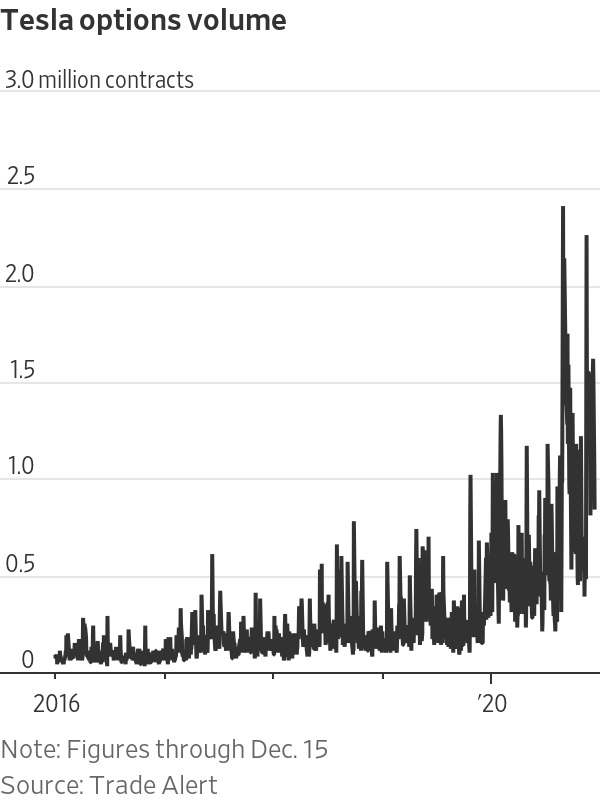 Traders are also watching how the giant addition will ripple through the derivatives market. Tesla shares are nearly three times as volatile as the S&P this year, averaging a 4.1% daily move vs. the index’s 1.4%. Volatility is a key input to options pricing, meaning Tesla’s addition may influence prices of options contracts tied to the S&P 500 alongside other derivatives measures, traders and analysts said. The exact impact is unclear, and will depend on how volatile Tesla continues to be as well as how correlated it is to the rest of the index constituents, traders said.

“You have a much more volatile member—at a significant scale—joining an index and no real proof or historical precedent for it,” said Cem Karsan, a senior managing partner at volatility hedge fund Aegea Capital Management LLC, who has been trading Tesla options. “They have to affect each other.”

Tesla’s addition could also drive moves in smaller-capitalization stocks that will be sold to make room for it, traders said. A bout of selling could lead to a liquidity crunch, potentially driving prices of some shares sharply lower.

What are you watching for as Tesla joins the S&P 500 index? Join the conversation below.