NASA’s Perseverance rover hasn’t started roaming the red planet just yet, but its cameras have been busy at work.

A suite of ruggedized, off-the-shelf sports cameras captured unprecedented footage of the rover descending to Mars and landing in Jezero Crater on Thursday. Then the rover’s science and navigation cameras began snapping away as soon as it was on the ground. The results are breathtaking.

So far, NASA has published more than 4,700 images from the rover, with many more to come.

“It’s been a firehose of data,” Justin Maki, a Perseverance imaging scientist and the chief of the instrument-operations team, said in a press conference on Monday.

The new photos reveal the sand dunes, rocks, and distant 200-foot-tall cliffs of the ancient lake bed where Perseverance now sits. It’s the most hazardous terrain any Mars landing has ever targeted, but it’s already paying off in unprecedented portraits of the red planet.

“I review images for Mars, like, every day. That’s what I do. And when I saw these images come down, I have to say, I was truly amazed,” Maki said. “I know it’s been a tough year for everybody, and we’re hoping that maybe these images will help brighten people’s day.”

After landing on Thursday, NASA’s Perseverance rover immediately started beaming back thousands of photos of the red planet. 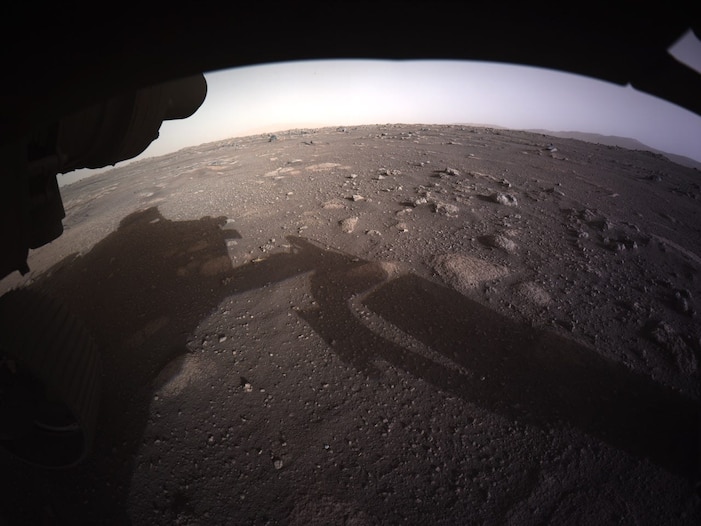 The first high-resolution, color image sent back by the Hazard Cameras (Hazcams) on the underside of Perseverance.

These include the first-ever images of a rover landing on Mars. Five cameras captured more than 23,000 images during Perseverance’s descent. 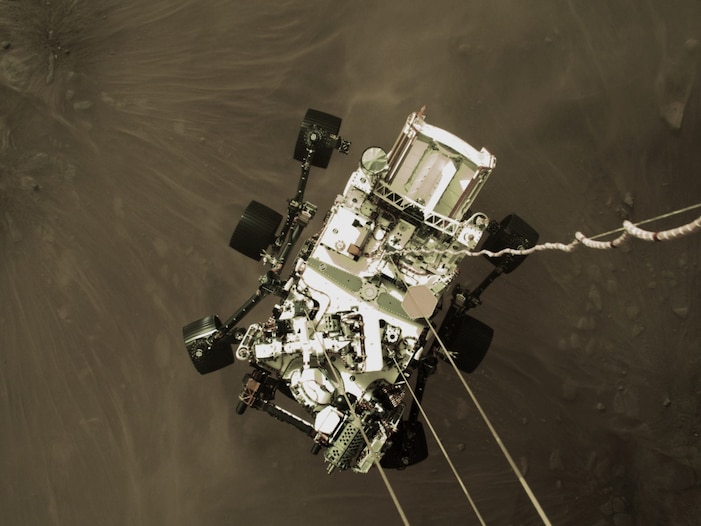 A photo of NASA’s Perseverance rover just feet above the Martian surface – part of a video several cameras recorded of the landing on February 18, 2021.

NASA has also released a three-minute video of the rover’s descent and landing. Watch it and read more here.

The cameras started recording as the capsule carrying the rover deployed a 70-foot-wide parachute to slow its fall through the Martian atmosphere. 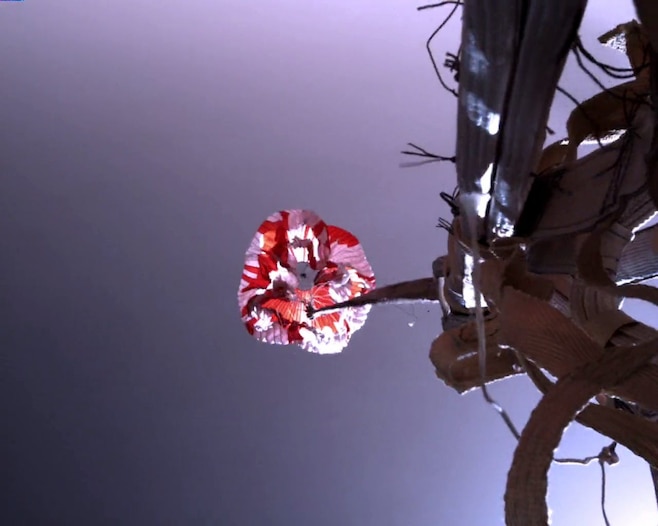 A camera mounted to the Perseverance rover’s entry capsule captured this image of the parachute deploying.

Hidden in the parachute’s pattern is binary computer code spelling out the message “Dare mighty things.” 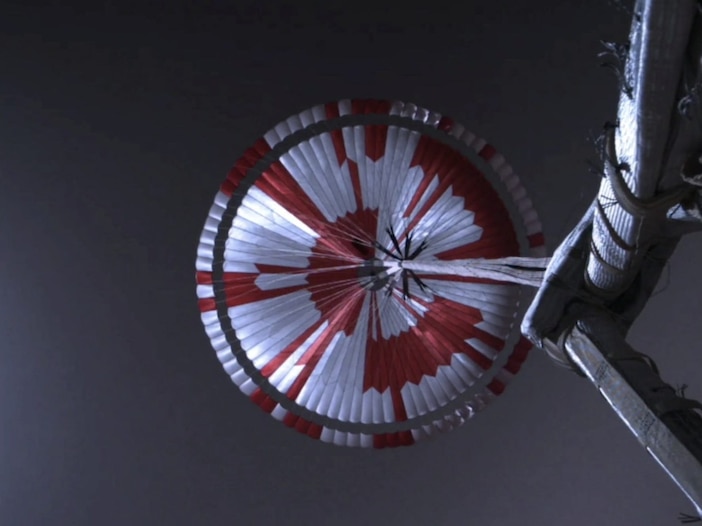 A screengrab from the new video shows the Perseverance capsule’s parachute deploying.

When the bottom panel of the capsule fell away, that exposed a camera on the bottom of the rover, which captured Jezero Crater below. 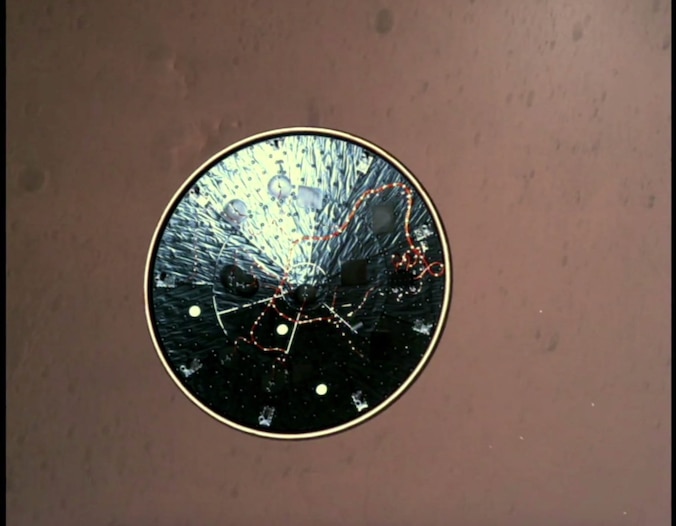 A screengrab from Perseverance’s landing video shows the heat shield falling away, exposing a camera on the rover’s belly as it descends to Mars.

In this ancient lake bed, Perseverance is set to hunt for signs of ancient alien microbes that could be fossilized there, especially along the river delta that once filled the crater with water. 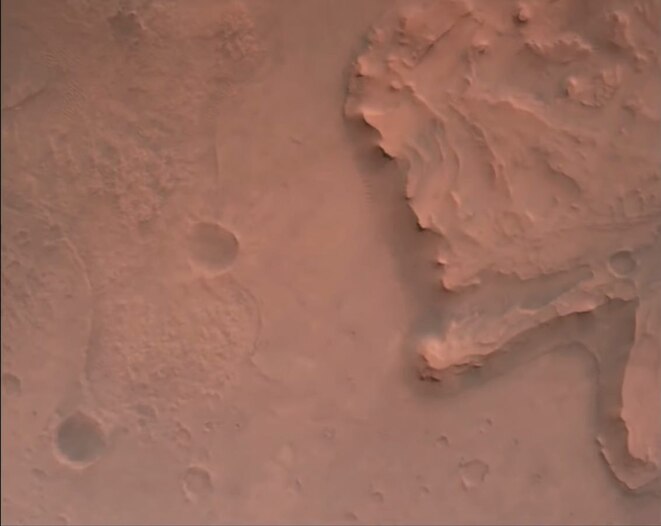 A screengrab from the Perseverance rover’s descent and landing video shows Jezero Crater, with the 200-foot cliffs of its river delta on the right.

Read more about Jezero Crater and its potential for alien life here.

All these images had to be color corrected. Here’s what they looked like before that. 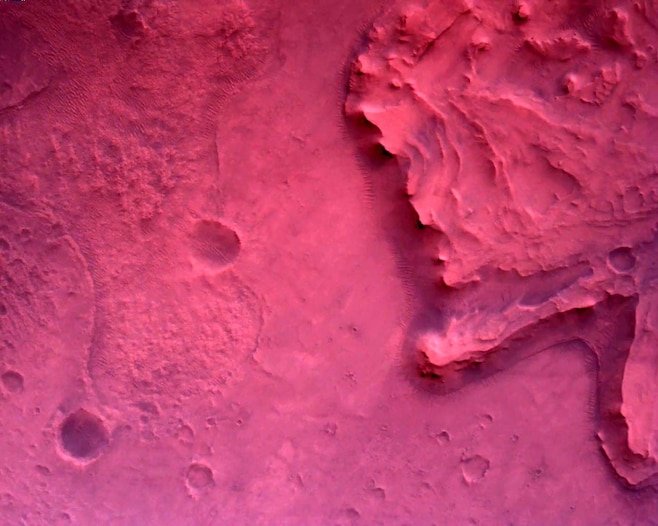 A camera on the bottom of NASA’s Mars Perseverance rover acquired this image during descent on February 18, 2021. It has not been color corrected.

During the landing, the capsule dropped the rover, and then a jetpack attached to Perseverance’s back fired its engines and flew to the landing site. There, it lowered the rover on 25-foot nylon cables. 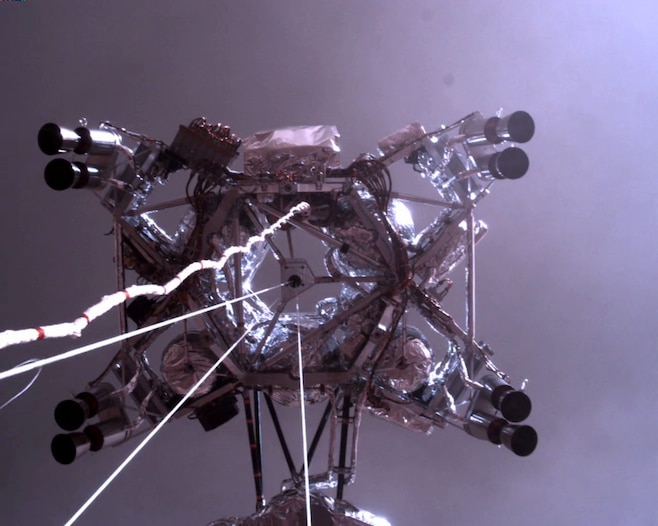 A camera on top of Perseverance captured the jetpack lowering the rover to its landing spot.

As it approached, the jetpack’s engines kicked up swirling clouds of dust on the Martian surface. 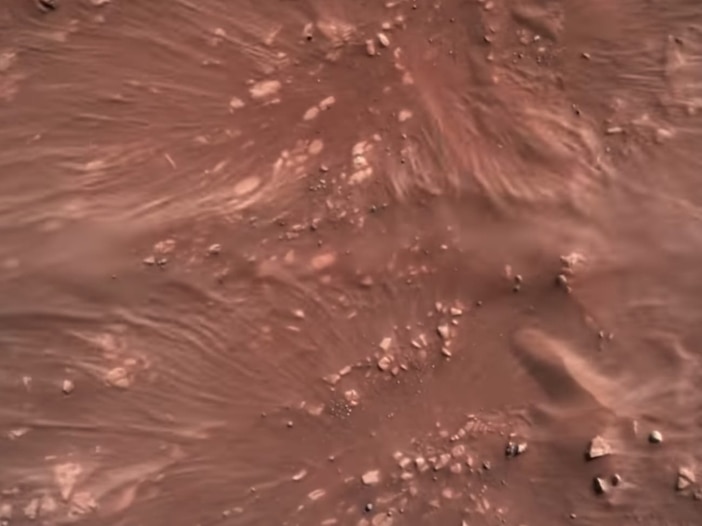 A screengrab from the rover’s descent-camera video shows dust swirling below as the rover is about to touch down.

Then the jetpack released the rover and flew away to crash-land at a safe distance. 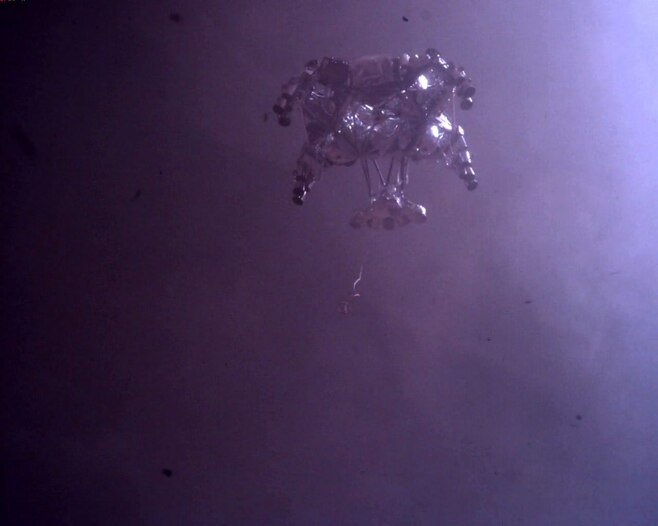 After delivering Perseverance to its touchdown, the jetpack releases the nylon cable and flies away.

Before the dust settled, the rover was already beaming back its first photos from the Martian surface. 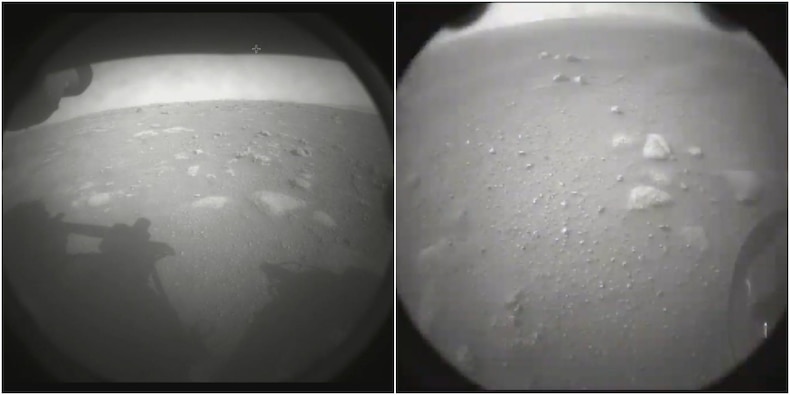 The first (left) and second (right) images that Perseverance took seconds after landing on Mars, February 18, 2021.

The first images revealed some very holey rocks that got NASA scientists excited. The rocks could be volcanic, or water could have tunneled through them. 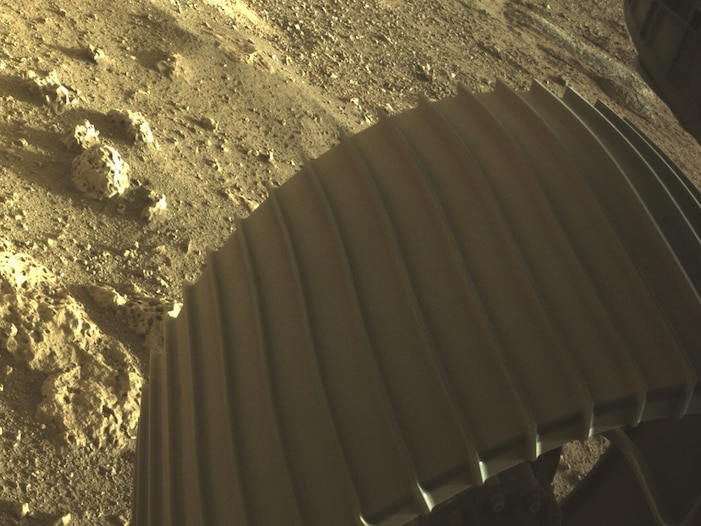 One of Perseverance’s color Hazard Cameras (Hazcams) captured this image of one of the rover’s six aluminum wheels after its landing on February 18, 2021.

Over the weekend, NASA engineers instructed Perseverance to deploy its mast. That gave a much better view of both the landscape and the rover. 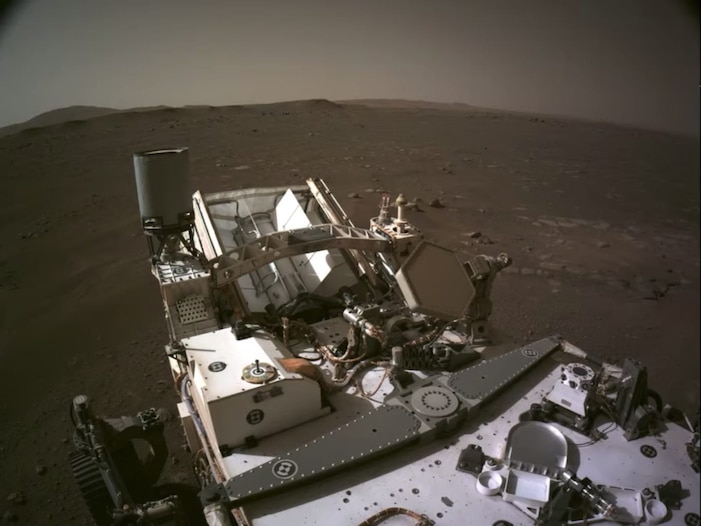 A screengrab from a NASA press conference showing a color-approximated version of a Navcam photo of the rover’s body.

The rover’s Mastcam-Z camera, named for its powerful zoom lens, used a color wheel built into the rover to calibrate itself. 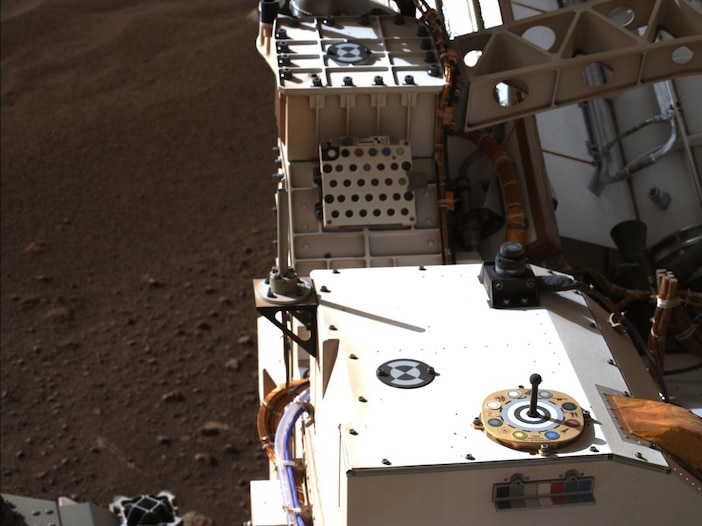 “We’re going to get incredibly high-resolution photos from this imaging system,” Maki said. 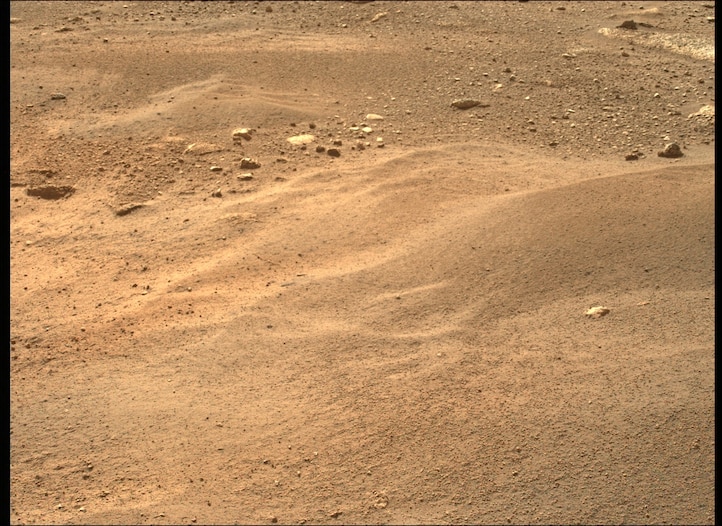 High on its mast, Perseverance’s Navcam camera can see everything. It will help the rover drive. 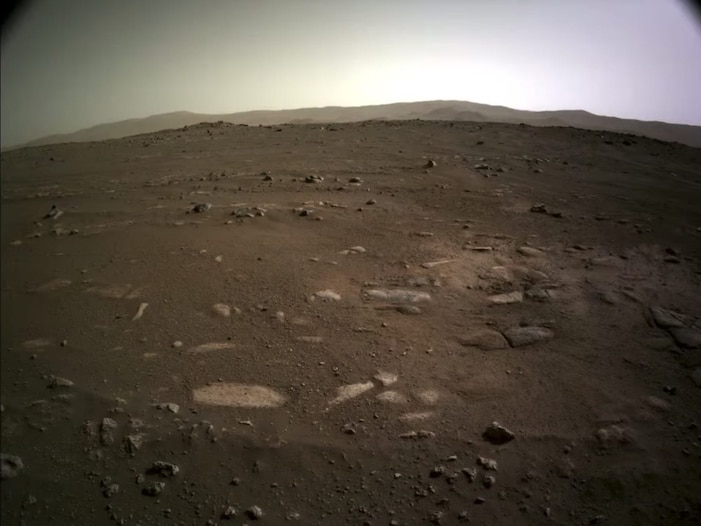 A screengrab from a NASA press conference shows a color-approximated version of a Navcam photo, looking south.

To the west of the rover, the Navcam can see the cliffs of the river delta on the horizon. That’s where the rover is headed. 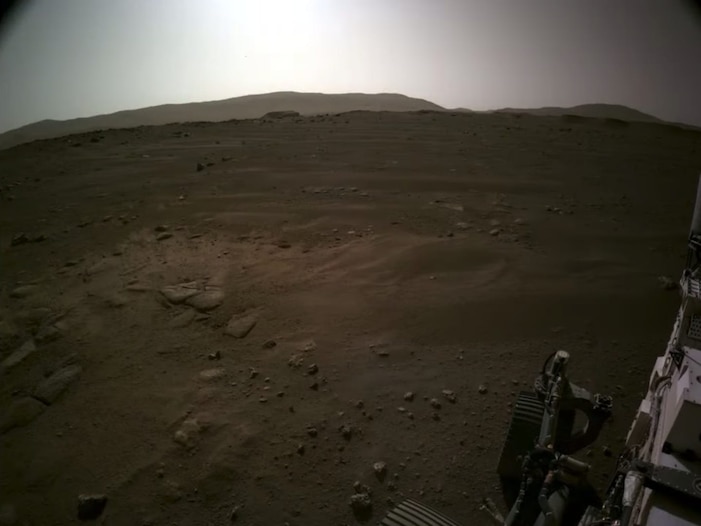 A screengrab from a NASA press conference shows a color-approximated version of a Navcam photo looking west toward the river delta cliffs.

The Perseverance team on Earth stitched six of those images together to create a 360-degree panorama.

This panorama, taken on February 20, 2021, by the Navigation Cameras on the Perseverance Mars rover, was stitched together from six individual images.

NASA turned that panorama into a video that you can drag left and right to see the view from Perseverance’s perspective.