Here’s what we are watching as markets kick into gear Thursday.—U.S. stock futures rose as investors cheered signs of progress toward a fresh stimulus package that could support the economy through a potential winter slowdown.

The dollar is extending its recent decline after most Fed officials yesterday projected interest rates will stay near zero for at least three years.

—
FedEx
will report its quarterly earnings after the close.

—Data on initial jobless claims for the week ending Dec. 12 are due at 8:30 a.m. ET. The number of people applying for unemployment benefits is expected to have eased slightly, but not enough to allay concerns of weakening job gains.

—The Kansas City Fed’s manufacturing survey for December, due at 11 a.m., is expected to fall to 10 from 11 a month earlier.

—Roku shares jumped almost 7% premarket after the company reached a deal on Wednesday with AT&T Inc.’s WarnerMedia to carry the HBO Max streaming service, ending an eight-month standoff between the companies.

—Shares of homebuilder
Lennar
3.4% before the bell after the company said it expects first-quarter home deliveries and new orders to be better than analysts are predicting.

—Moderna stock rose 1% in offhours trade. The chairman of a federal vaccine-advisory committee said the panel is likely to recommend that the Food and Drug Administration grant an emergency-use authorization for the company’s new Covid-19 vaccine when the panel meets Thursday.

—Shares of online food retailer
Wunong Net Technology
soared 14.4% in premarket trade. The company’s shares closed at $65.10 yesterday. They started trading at $5 on Tuesday after Wunong priced its IPO at $5 a share.

—
Sanderson Farms
rose 1.4% premarket after the company swung to a fourth-quarter profit.

—Bitcoin surged another 8.5% Thursday to $23,046, according to CoinDesk, part of a furious rally that has seen the digital currency nearly triple this year.

Chart of the Day 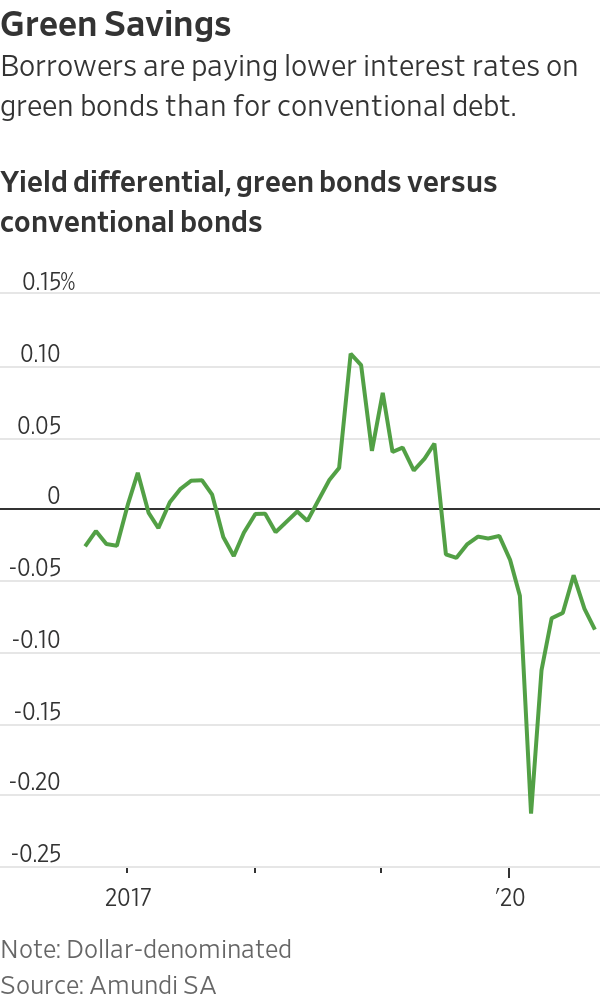 Research shows that companies and governments that borrow using so-called green bonds can save a bit of money. The market for these bonds, which fund environmental objectives such as renewable power, is booming.

Who Wins From Brexit? New York