Mark Coombs
made his fortune winning outsized bond wagers in emerging markets like Brazil and Russia. Recently, his luck has soured.

Big trades he made in Argentina, Ecuador and Lebanon all backfired simultaneously in 2020. Ensuing losses hammered shares of his investment firm,
Ashmore Group,
and cost the reclusive trader around $325 million in personal paper losses, according to data from S&P Capital IQ.

Once an approximately $100 billion powerhouse, Ashmore’s assets under management had fallen to $85.5 billion by September through a combination of withdrawals and investment losses. Clients including the Connecticut state retirement plan have pulled billions of dollars from the company, and competing money managers have placed bets against Ashmore stock. The outflows contrast with the roughly $250 billion investors poured into bond mutual funds this year through September, according to data from the Investment Company Institute.

The losing streak has drawn unwanted attention to Mr. Coombs, who strives to avoid the limelight. “He’s not your typical billionaire jetting around and buying megayachts,” one former colleague said. “He hates having pictures taken of him and is incredibly, fiercely private.”

Mr. Coombs built Ashmore over the past two decades with a signature mix of radical frugality—from his wardrobe to staff salaries—and contrarian trades in risky countries. He has weathered previous rough patches and is responding to the current one in similar fashion—by buying more bonds.

“We’ve done our thing, we’ve bought assets where we saw…cheap prices,” he said on a video call with analysts in September. 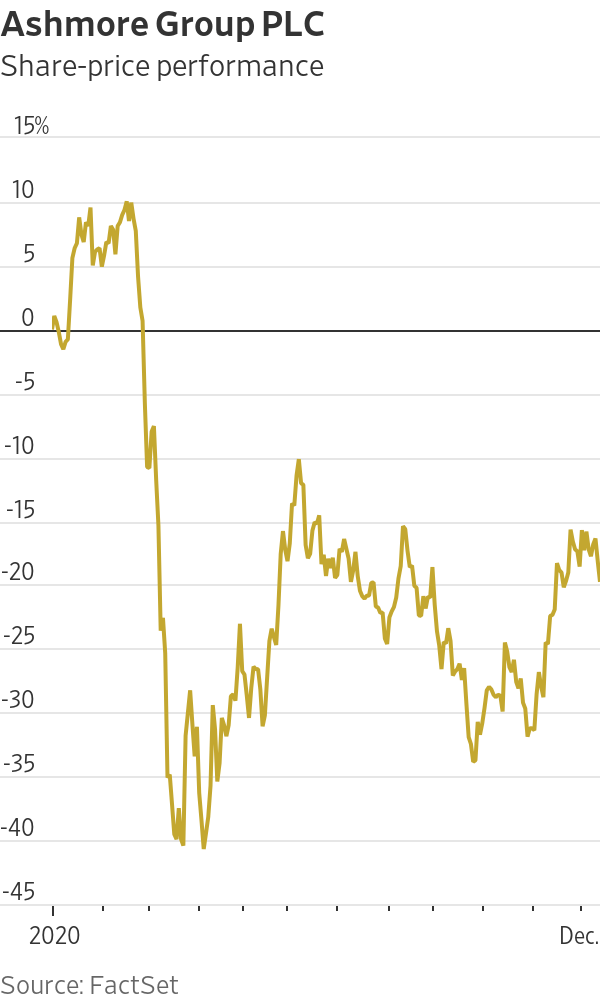 Ashmore’s European total return fund, for example, boosted the face amount of Ecuadorian bonds it held to $323 million in June from about $243 million in December 2019, according to Ashmore’s financial filings.

Still, what had been Ashmore’s largest mutual fund, which invests in short-term bonds, has lost 13.75% this year while a comparable index gained 4.15%, according to data from
Morningstar Inc.
The fund’s assets have shrunk by 69% to $2 billion, forcing it to sell Argentine, Ecuadorian and Lebanese bonds, the Morningstar data and financial reports show.

Meanwhile, funds managed by
BlackRock Inc.,
Eaton Vance Corp.
and Wellington Management have bet against Ashmore shares this year, although BlackRock terminated short positions on the stock in recent weeks, according to data from the U.K.’s Financial Conduct Authority. Ashmore shares fell 52% to $3.55 in February and March and have since recovered about half the loss, closing at $5.48 on Friday.

Connecticut’s state treasury decided in May to withdraw a roughly $730 million account with Ashmore, according to regulatory filings. This autumn,
Goldman Sachs Group Inc.
discontinued Ashmore as an option in its employee 401(k) retirement plan, according to a document reviewed by The Wall Street Journal.

Competitors say Ashmore has grown too large for Mr. Coombs’s high-octane investment style and for his unwillingness to delegate. Mr. Coombs declined to be interviewed. Ashmore’s investments are decided by a six-member investment committee that Mr. Coombs heads, a person close to the company said.

What does the future hold for Mark Coombs and Ashmore? Join the conversation below.

“They’re trying to put a brave face on it, but this is the worst we’ve seen since the financial crisis,” said

David McCann,
an analyst at London-based brokerage Numis Securities who has a “reduce” rating on Ashmore stock.

Mr. Coombs grew up in London and attended Cambridge University, where he played rugby and studied law. He worked for about 15 years as an emerging-markets investment banker before founding Ashmore in 1999.

The idea was to pioneer investing in emerging markets, where he believed growth would outpace the U.S. and Europe. That has mostly played out—the face value of emerging-market debt outstanding climbed to $26.5 trillion in 2018 from $90 billion in 1984, around when Mr. Coombs first entered finance, according to data from Ashmore.

Former colleagues describe Mr. Coombs as a candid and visionary leader with a high IQ who is propelled by a fierce drive to make money, often going on buying binges in crises when bond prices crashed. Mr. Coombs can be charming with clients and in groups but in private is more taciturn, former colleagues said.

He lives in the same home he owned before becoming a billionaire and limits his clothing to multiple copies of one suit and tie, sometimes wearing old shirts with frayed cuffs to client meetings, former colleagues say. Mr. Coombs competes in triathlons and often eats a single meal per day to stay trim.

The company’s first big break came in 2001 when Mr. Coombs sold all his Argentine bond holdings before the country defaulted. Dodging that bullet, along with large, winning bets in Brazil and Russia, helped Ashmore deliver average annual returns around 18% at the time, one of the former colleagues said.

Mr. Coombs became an emerging-markets evangelist, persuading insurers, pensions and endowments to invest with him, while paying hedge-fund-like fees. When the company listed on the
London Stock Exchange
in 2006, it was managing $20 billion, and Mr. Coomb’s 47% stake was worth about $1.6 billion, according to data from S&P Capital IQ.

But even in emerging markets, interest rates fell and yield grew harder to find. To deliver, Mr. Coombs went big in three countries that paid high interest rates because they struggled with large deficits and political instability, leading to the unlucky trifecta of Argentina, Ecuador and Lebanon.

Some Wall Street analysts see cause for optimism in Ashmore’s disclosure that outflows slowed to $800 million in the third quarter. Others expect the cash drain to intensify again in January when institutional investors rebalance portfolios.

Mr. Coombs said on the September analyst call that it’s uncertain how many institutional clients will leave. “It could be half of them, it could be 10% of them, he said. “We just don’t know.”

Write to Matt Wirz at matthieu.wirz@wsj.com