Planet Fitness Inc.
kicked off 2020 by announcing that it would sponsor the television show “The Biggest Loser.” Little did it know that Covid-19 would soon make that an apt label for itself—a crash diet that left its market value 70% lighter in less than a month.

Yet, while many large and small competitors were pushed into bankruptcy by the pandemic, Planet Fitness somehow gained all the weight back, and then some. Its shares on Monday morning were trading 8% higher than a year ago. That makes no sense.

Planet Fitness has a clever business model that has helped it grow rapidly, but certain elements of it backfired recently. Charging very little and deliberately making it difficult to cancel, its best customers rarely show up but keep paying anyway. Its gyms couldn’t fit them all at once if they did. Even so, turnover is high enough to require constant recruitment of new members by its mostly franchisee-owned stores.

The company made an apparent tactical error by drafting dues from members in March even as lockdown orders shut down all their U.S. gyms. Cancellations had to be in person or by letter even as gyms were closed, and members wary of unnecessary trips still can’t do so online or by phone even with gyms reopened. That infuriated those forced to move or who were financially pinched, judging by social-media posts. Membership went from 15.5 million in March to just 14 million at the end of October. The move also artificially flattered third-quarter results reported last month since those monthly revenues were credited for future use and were deferred until gyms reopened. 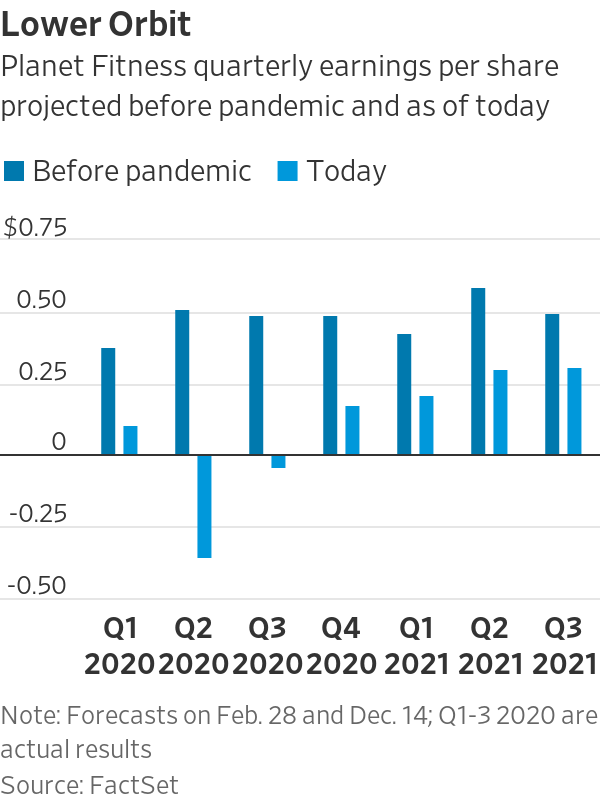 While overall revenue fell by 37% year over year, equipment revenue, the lucrative business of outfitting and periodically refurbishing franchised gyms, tumbled by 71%. The company was forced to offer a discount of 15% on equipment to support new store openings and it gave franchisees a 12-month extension on “development requirements.” Growth in new gyms has, not surprisingly, fallen far short of expectations. Planet Fitness ended the quarter at about one-third of its original 2020 store-growth target and has suspended financial guidance.

The company’s “no judgment zone” slogan doesn’t apply to analysts. An expected profit for 2020 has turned into a projected loss. Earnings-per-share expectations for 2021 have tumbled by almost half since February, according to FactSet. In other words, even expectations that its gyms will remain open and that vaccines will return life to normal can’t obscure the fact that the fast-growing chain’s momentum has been seriously disrupted.

On the plus side, Planet Fitness has merely bent while the likes of 24 Hour Fitness, Gold’s Gym, Town Sports and countless independent gyms have broken. Retail vacancies resulting from the pandemic present cheap opportunities for franchisees looking to expand.

But should they? People are eager for a return to normal, but many have bought home exercise equipment and could remain wary of panting strangers. And while Planet Fitness has logged many downloads of its own fitness app, it enters a crowded field and must tread carefully lest it cannibalize franchisees’ prospects.

For shareholders who hung on, it is time to hop off of this elliptical while they are ahead. It is hard to square the damage and continuing uncertainty from Covid-19 with a stock trading at 60 times next year’s earnings.

Ocugen Shares Are Trading Higher On Its...

Ocugen Shares Are Trading Higher On Its Partner's...

Ocugen Shares Are Trading Higher On Its Partner's...