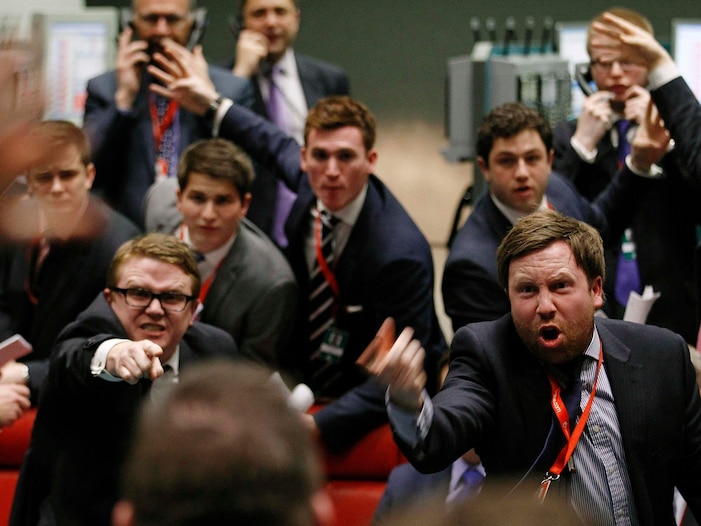 Traders and clerks react on the floor of the London Metal Exchange in the City of London February 14, 2012.

Investor euphoria has seemed to reach a particular level of bizarreness this year.

Stock indices are at all-time-highs despite an uneven economic recovery and the risk that new strains of COVID-19 may prolong the global pandemic.

Armies of retail traders are conspiring online to push share prices of zombie-like companies and Dogecoin, what is supposed to be a joke cryptocurrency, to unthinkable levels – not to mention that they’re being helped by tweets from Elon Musk, the richest man on earth.

Many would say these speculative frenzies are sure signs of a bubble. And yet, most major institutions on Wall Street reject that idea.  The high valuations are justified by low interest rates, goes one argument. A robust economic recovery and bull cycle still lie ahead, goes another. The broader consensus is that the best of the bull market is yet to come.

For the most part, especially when it comes to the broader indices, famed economist David Rosenberg disagrees.

Rosenberg, the chief economist and strategist at Rosenberg Research, is warning that the current euphoric conditions are lifting valuations at an unsustainable rate, setting up stocks for muted returns over the next year. He cited the dot-com bubble as precedent.

“Many similarities to 1999 are starting to appear,” Rosenberg said in the note. “There is a strong desire to own equities – stretched valuations, euphoric sentiment, retail investor participation, and IPO activity are all a symptom of this phenomenon.”

Rosenberg’s proprietary US equity model, which measures the outlook for forward returns on a scale of 1-100, currently registers a 9.6 reading. When the outlook is this poor, the S&P 500 is likely due to return just 2.3% over the next 12 months, the model shows.

“Ultimately, for our model to become more positive, we would need to see a more meaningful ‘wash out’ occur, which is overdue in our view,” he said.

The following chart, based on Rosenberg’s model, puts the current prediction for weak forward returns in historical context. For example, when stocks crashed last March and investor sentiment was far from euphoric, the model recommended overweight positioning and forecast strong returns.

But in addition to his own scale, Rosenberg lays out many other measures that show how extreme current market conditions are.

For one, there is the growing issuance of equities as firms go public through IPOs and SPACs: 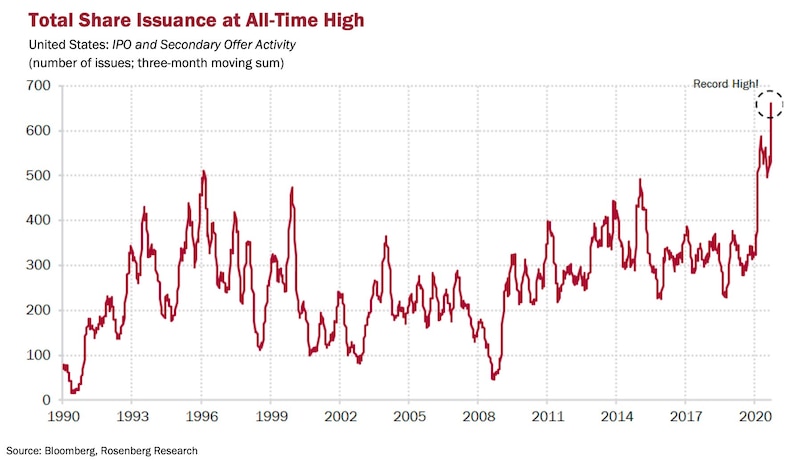 On this trend, Rosenberg says: “If we add in all the additional share offerings on top of IPOs, the three-month trend has exploded to a new record high – nearly 30% above the prior peak in the mid 1990s. Ultimately, the flurry of IPO and equity issuance activity, and the frenzy with which investors are snapping up these shares, are all classic signs of euphoric sentiment and bubble-like conditions.”

But then there’s the fact that the heightened demand to own these new shares is fueling their outperformance, despite the fundamentals, which Rosenberg said is leading more companies to go public. This reality-absent phenomenon is also taking place in non-profitable tech stocks.

Both trends are shown below: 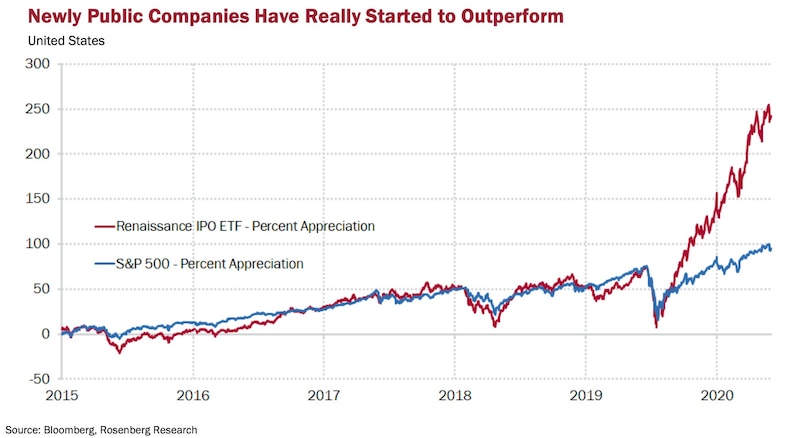 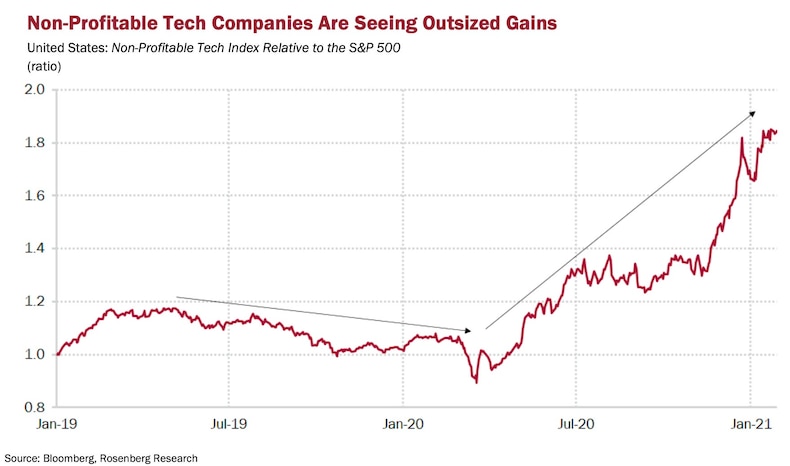 This euphoria is also seen in volumes of call-option purchases, or bets that stock prices will continue rising: 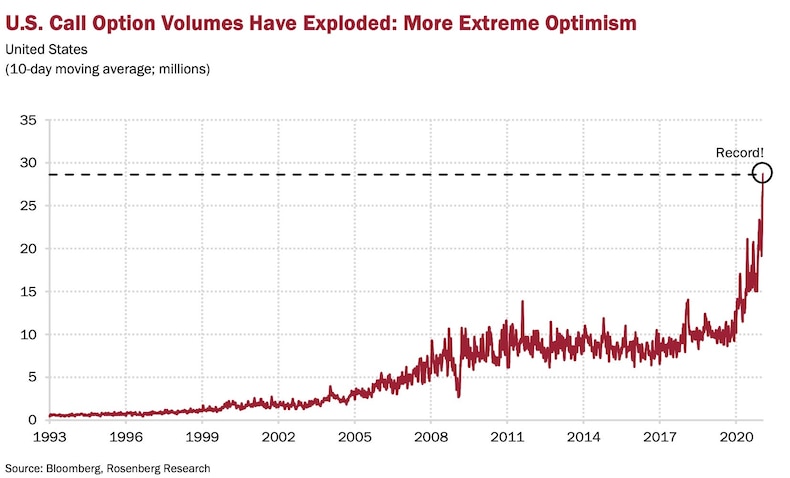 And back to valuations, the median forward price-to-earnings ratio of the S&P 500’s 100 most expensive stocks is approaching dot-com bubble levels. Rosenberg pointed to the fact that the S&P 500’s top 100 names in terms of valuation lost a median of 30% over the 12 months after the bubble burst. 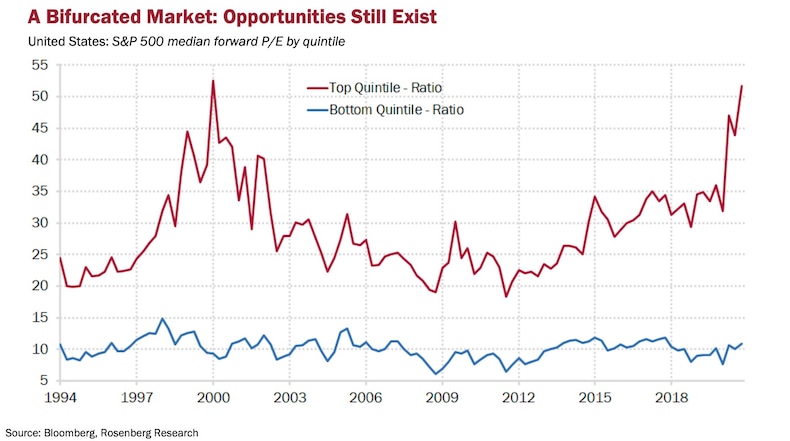 Rosenberg paints a dim picture for the future outlook. But as the title of the above chart suggests, Rosenberg isn’t completely bearish.

After the dot-com bubble burst, the bottom quintile stocks by valuation, shown above in blue, rose by a median value of 20%. Rosenberg is similarly bullish on the least expensive names today. In particular, he most likes the financial and energy sectors.

“While the companies that dominate the top valuation quintile today may well have attractive narratives or themes behind them, the reality is that multiples at these levels begin to complicate forward returns. As a result, going all-in on these names, at this time, does not seem prudent from our standpoint,” Rosenberg said.

He added: “Rather, we believe investors will benefit from seeking out opportunities in the bottom quintile group – 40% of which are Financials, which happens to have been our top-rated sector for the past three months.”

The iShares US Financials exchange-traded fund and iShares US Energy ETF offer exposure to these sectors.