How the Paramount+ launch compares with Apple TV+, Disney+ and all the rest

LONDON (AFP) – A stalwart of the British political scene, Larry the Cat has ruled the roost in Downing Street for a decade, serving three prime ministers and becoming a legend in his own naptime.

He was adopted from London’s Battersea Dogs & Cats Home, an animal shelter, and was chosen for his mousing skills, according to his biography on the Downing Street website.

He received the title of Chief Mouser – the first inhabitant of the prime minister’s famous residence and office to do so.

But while he did catch three mice in his early months, according to Mr David Cameron, his first prime minister, he has since disappointed, leaving the role in the “tactical planning stage”.

Nevertheless this nonchalant operator has clung onto power.

While lacking the killer instinct, Larry has made fur fly in very undiplomatic spats with feline rivals including Palmerston, the black-and-white resident of the nearby foreign ministry.

Palmerston has since turned tail, quit politics and retired to the countryside in 2020.

Larry’s soft-power diplomacy has “captured the hearts of the Great British public,” according to Downing Street.

That includes building up a rapport with the journalists, photographers and camera crews stationed outside, who reward him with strokes and snacks.

When Mr Cameron left Downing Street in 2016 after the British public backed the vote “Leave” campaign, Larry steadfastly stayed on.

Mr Cameron even had to fight off rumours of a rift with his four-legged housemate at his last Prime Minister’s Questions session with lawmakers.

He held aloft a photo of them together, denying suggestions that “somehow I don’t love Larry”.

Since seen as belonging to Downing Street staff, Larry has cohabited with Mrs Theresa May and now Mr Boris Johnson.

‘I run the place’

In a nation of animal-lovers, a cat in Downing Street plays a crucial role in public relations, the historian Anthony Seldon told AFP.

“It helps to humanise the prime minister,” said the author of biographies of the last four premiers.

Larry sits with press photographers as they work in Downing Street in central London, on Dec 9, 2020. PHOTO: AFP

At times of crisis, a cat can “act as a distraction”, he added.

Dr Tim Bale, professor of politics at Queen Mary University of London, attributes Larry’s longevity in the role to prime ministers’ desire to bridge “a huge disconnect between politicians and voters”.

A prime minister, particularly one who has polarised the public, is “going to seize any and every opportunity they have to give people the impression that they’ve got something in common”.

“Not all of us like cats – which is presumably why Boris Johnson also got a dog,” he added. “But millions of Brits have pets. So this is one such opportunity.”

Larry has rubbed up against numerous world leaders on state visits – with varying degrees of friendliness.

Larry sat underneath and stubbornly refused to move.

On Christmas Eve, as journalists waited outside for a Brexit trade deal announcement, Larry suddenly rushed forward and pounced on a pigeon, prompting gasps of excitement.

It flew away unharmed. 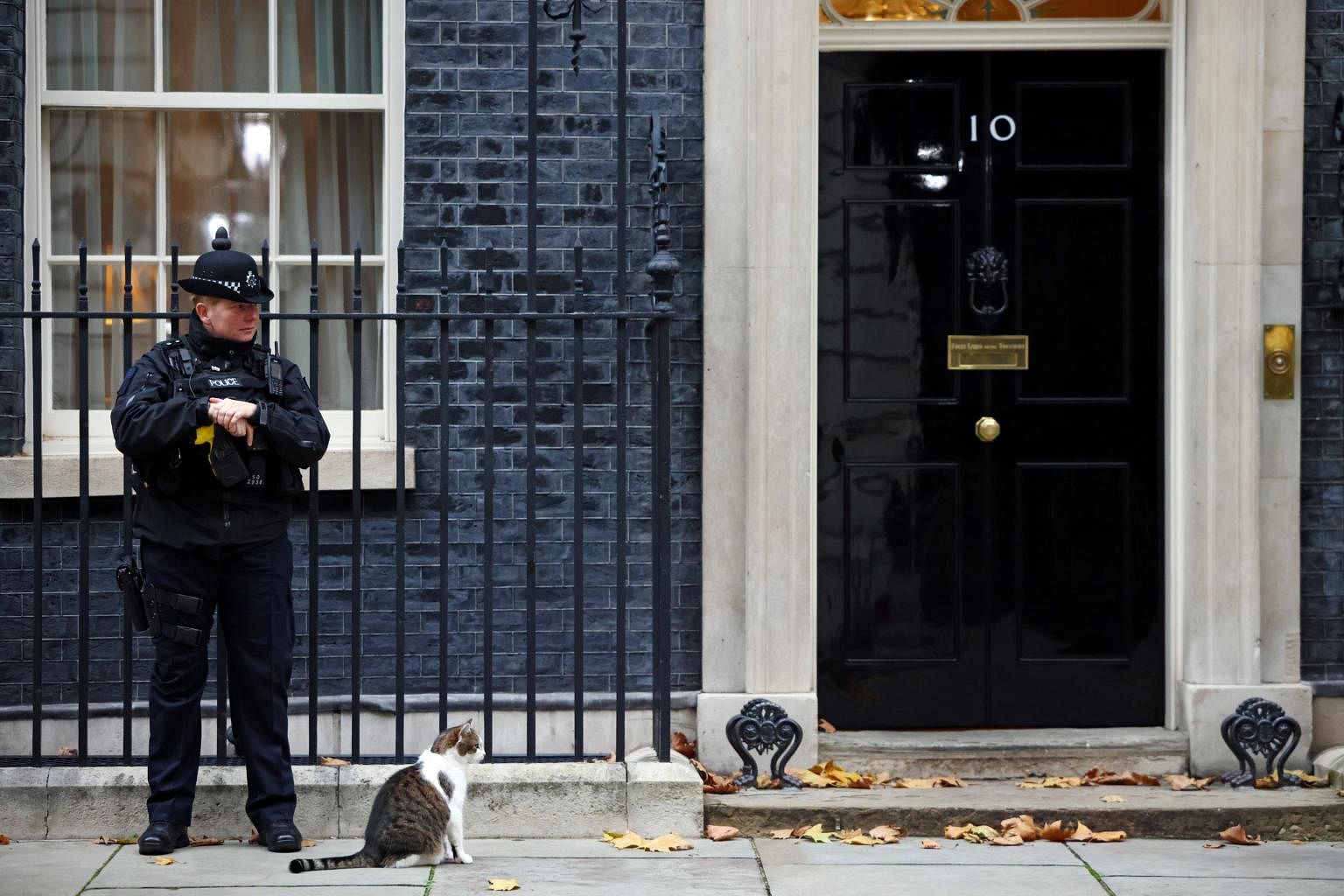 Larry the cat sits next to a police officer outside 10 Downing Street, in London, Britain, on Nov 16, 2020. PHOTO: REUTERS

While maintaining a dignified silence in public, Larry has told his story in a book called “The Larry Diaries” by journalist James Robinson.

Contacted via social media, the account’s author insisted there is no human intervention and gave a brief insight into Larry’s long rule at Downing Street.

“The key thing to remember is that I live here permanently, the politicians just lodge with me for a bit until they’re fired,” he said.

“They all work out sooner or later that it’s me that runs the place.”

How the Paramount+ launch compares with Apple...

Take a look at the confusing bank...

Take a look at the confusing bank interface...

Take a look at the confusing bank interface...