With bond yields at record lows and market liquidity running free, central banks are searching for new ways to stimulate the economy. In Europe, officials are pointing in a new direction: Let banks make more money.

Investors shouldn’t be surprised if the results underwhelm.

On Thursday, the European Central Bank enlarged its Pandemic Emergency Purchase Program, or PEPP, by €500 billion, equivalent to $607 billion, and unveiled new rounds of long-term loans to banks.

Christine Lagarde,
who is trying to ward off a double-dip recession, highlighted that financial conditions have worsened with the rebound in Covid-19 cases. “It’s not so much about the rate but about the terms of conditions offered to borrowers,” she said.

Buying more government paper will do little to fix this. It is a key tool for closing the price gap between the debt of different eurozone nations—PEPP, in particular, has been skewed toward poorer countries—but has mostly run its course. Spain just issued debt with negative borrowing costs. 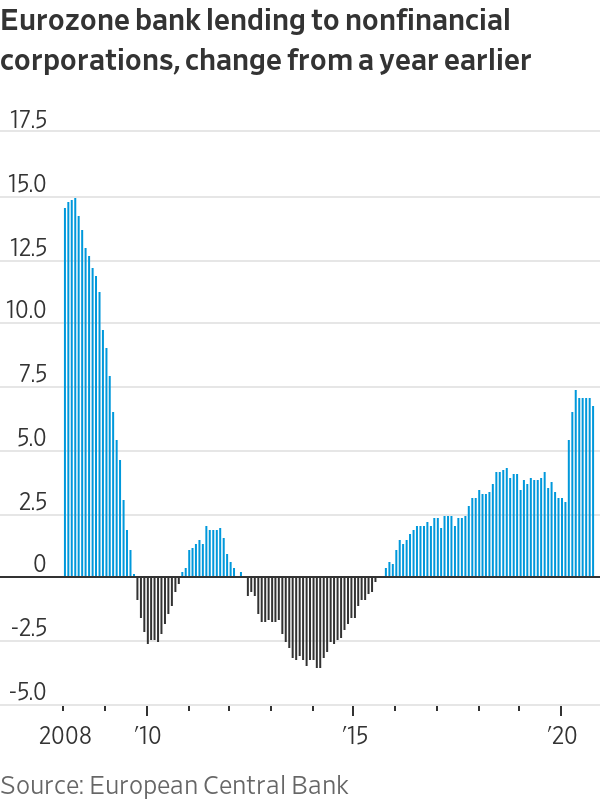 This leaves lending to banks, which are the key source of credit for European corporations. Much of the blow of Covid-19 has been cushioned by a surge in bank lending, official data shows, which has kept financial conditions looser than in 2008 and even 2011.

Despite their stated purpose, however, the ECB’s long-term lending facilities don’t really work by giving banks liquidity. They work by making them money.

Banks don’t need long-term credit from the central bank. As long as they can present adequate collateral to the weekly monetary operations, they can always get cash. And were their collateral to turn bad, they would have to repay the long-term loans anyway.

The reason for banks to tap these facilities has long been to circumvent regulations penalizing short-term borrowing. Since the pandemic, there is another: The ECB has lowered the minimum rate on these loans to minus 1%—below market rates—but kept its short-term benchmark rate at minus 0.5%. So banks can turn a profit simply by borrowing and parking the money.

As of Thursday, these favorable terms will be extended until June 2022, and banks will be able to borrow a larger amount relative to their loan portfolios. These facilities are conditional on them extending credit to the real economy, but simply maintaining net lending is enough.

The Bank of England is also toying with this “dual interest rates” policy. Its proponents, such as M&G Investments’ Eric Lonergan and Harvard economist

Megan Greene,
argue that it gives central banks limitless firepower, even when market borrowing costs are at record lows. At the limit, it allows officials to set the net interest income of the banking sector, and thus its profits.

Banks with higher profitability and hence capital buffers tend to lend more to companies and families. So it could make sense for policy makers to help out beleaguered European banks, which have suffered due to regulations and stimulus policies applied by the ECB itself.

Yet the strategy isn’t limitless: Without positive economic prospects, companies won’t borrow, nor will banks extend more credit just to meet a net-lending threshold. A recent analysis by TS Lombard showed that borrowing from the ECB’s long-term schemes this year has been closely linked to government-loan guarantees. Generous funding is necessary but not sufficient.

Giving money to banks may be the last effective weapon in the ECB’s arsenal. That doesn’t mean it is enough.