NEW YORK (NYTIMES) – A massive winter storm bulldozed its way across the southern and central United States on Monday (Feb 15), leaving millions of people without power amid freezing temperatures, sending vehicles crashing into one another on ice-glazed highways and bringing blizzardlike conditions to places where snowfall is usually the news from elsewhere.

The storm was notable for its enormous reach – 150 million people were under storm warnings – and for a particularly perilous element it brought nearly everywhere: ice. It left a treacherous varnish on roads across a midsection of the country, including places where driving on ice is a rarity.

It was as confounding a storm as it was punishing.

Snow blanketed Gulf of Mexico beaches and people went ice sledding on the roads of southern Louisiana. Alabama was warned of brutal ice storms in some places and of possible tornado outbreaks in others. Temperatures were lower in Austin than in Anchorage, Alaska.

“It’s snowing in Houston and it’s going to be raining in Pennsylvania,” said Charles Ross, a meteorologist with the National Weather Service in State College, Pennsylvania. “When does that ever happen?”

The state of Texas woke up on Monday to the worst winter onslaught in decades.

The state was blanketed by one of its largest snowfalls on record and grappling with hundreds of thousands of power outages, flight cancellations and urgent warnings from government leaders and emergency supervisors to stay put and reduce electric consumption.

The minus 13 deg C recorded in Austin was the lowest in 32 years, forecasters said, and the 6.4 inches (16cm) of snow dumped on the city overnight was reported to be the deepest in 55 years.

General view of Lower Broadway as vehicles and people traverse through snow and ice in Nashville, Tennessee, on Feb 15, 2021. PHOTO: AFP

Across the country, at least 11 people have died since the storm intensified in the middle of last week; 10 have been killed in car crashes on Kentucky and Texas roads, including a pile-up in Fort Worth, Texas that was attributed to slippery roads, involved more than 100 vehicles and killed six people.

And the authorities in San Antonio said that weather conditions contributed to the death of a 78-year-old man.

In Texas, an estimated 2.6 million homes and businesses had their power interrupted Sunday night and Monday morning because of storm damage or in rotating outages ordered by regulators.

Many of the interruptions were fairly short, lasting between 15 and 45 minutes, but some customers have lost power for hours and remained unsure late Monday when it would be back on.

The Southwest Power Pool, a consortium that oversees electric utilities in 14 states – from Montana to New Mexico and Minnesota to Louisiana – has ordered its member utilities to start controlled rolling cutoffs of electric service as the demand for power is overwhelming the available generation, which has been hampered by the storm.

“This is an unprecedented event and marks the first time SPP has ever had to call for controlled interruptions of service,” Lanny Nickell, the power pool’s chief operating officer, said in a statement.

Most of the outages will last for about an hour and will cut power to a few thousand customers at a time, but they are necessary to limit demand and “safeguard the reliability of the regional grid,” Nickell said.

After hurtling eastward across the South, the storm was expected to move into the Northeast.

An area stretching from Ohio into northern New England was expected to face ice and heavy snow, with some spots getting up to a foot of snow by Wednesday, according to the National Weather Service.

Heavy snow was already falling on Monday in Chicago, adding inches to several layers left in recent days. The forecast calls for a mix of sleet and freezing rain closer to the East Coast.

“We’re seeing snowfall in eastern Texas, and a wintry mix of snow, freezing rain, sleet, et cetera, all the way up through parts of the Ohio Valley and Great Lakes this morning.”

The brutal cold in the middle of the country seemed to defy a trend of ever-milder winters, but research suggests that frigid temperatures in Texas could be a consequence of global warming, a phenomenon that has prompted climate scientist Katharine Hayhoe to use the phrase “global weirding.”

There is research suggesting that Arctic warming is weakening the jet stream, the high-level air current that circles the northern latitudes and usually holds back the frigid polar vortex.

This allows the cold air to escape to the south, especially when a blast of additional warming strikes the stratosphere and deforms the vortex.

The result can be episodes of plunging temperatures, even in places that rarely get nipped by frost.

All along its path, the storm continued its disorienting assault. In Tennessee, sleet and freezing rain that began falling on Sunday turned into snow by Monday afternoon, and temperatures plunged, with a low of minus 12 deg C forecast for Tuesday.

Crews were at work trying to clear ice-slicked roadways for emergency vehicles and drivers, the authorities said, but the traffic accidents continued anyway, with cars and trucks skidding into each other and into ditches along roadsides.

“For the love of goodness, please stay home,” the Tennessee Highway Patrol said on Twitter on Monday afternoon. “It is very bad out here!!!! Another injury crash. The roads are white!!!!” 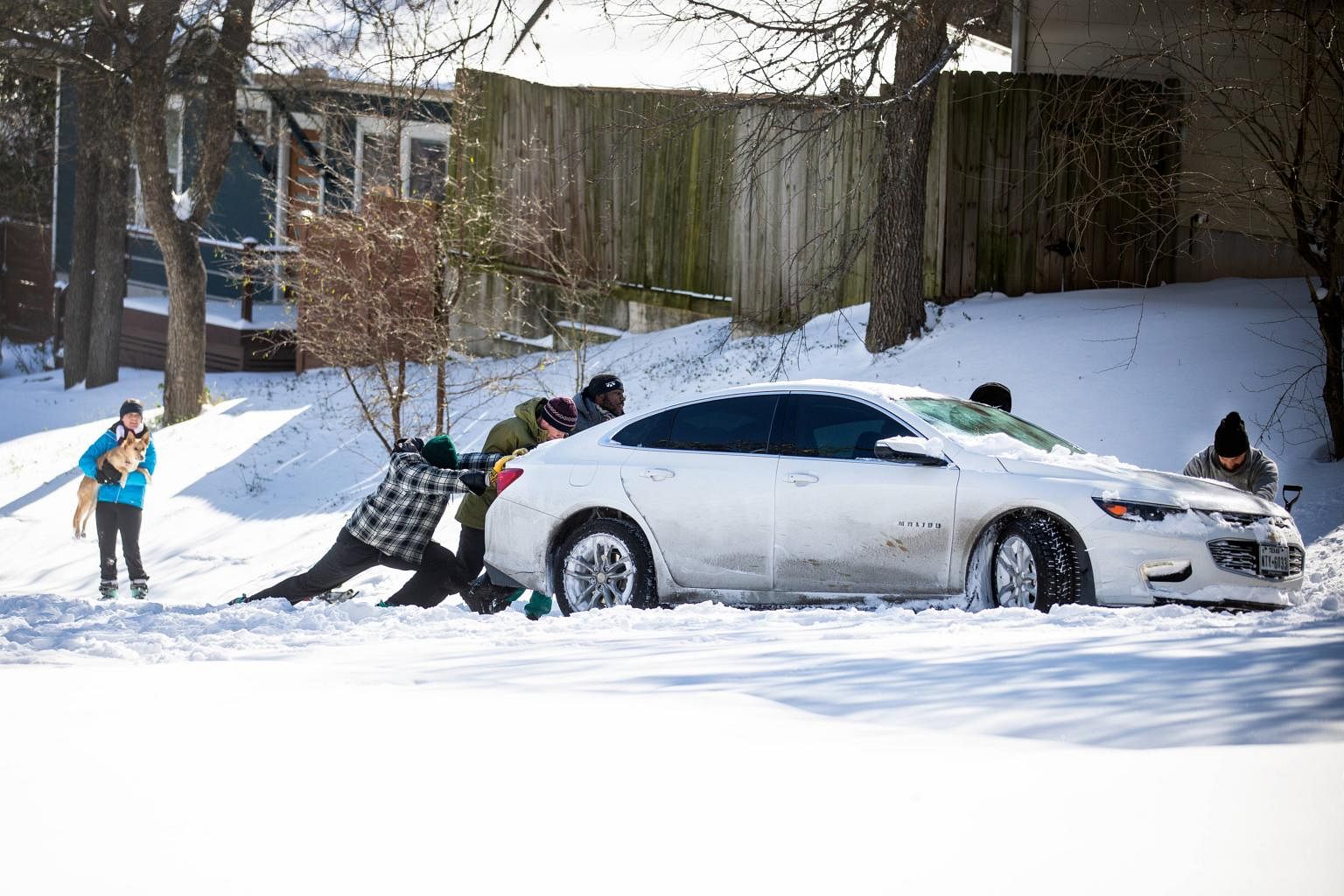 Officials in Kentucky shared similar concerns, as a winter storm warning was in effect in Louisville, with several more inches of snow expected.

“We did not make it through almost a year of a pandemic to lose people to a snow or ice storm,” Governor Andy Beshear said in a briefing on Monday.

In places where pipes never freeze and bridges rarely ice over, even a light snowstorm can prove dangerous. But this storm was a monster by any measure and it was barreling through a country already facing a litany of other crises.

Coronavirus vaccinations were postponed or canceled across the South, including in states that were already lagging the national average in the pace of vaccine distribution. And people on the Gulf Coast, just months into the long recovery from a record-breaking hurricane season, felt the deep chill through still-unfinished walls.

“The windy storm knocked a tree onto our house, then the wet storm poured the rain in,” said Adley Cormier, 68, whose house in Lake Charles, Louisiana, was battered by Hurricanes Laura and Delta over the last summer.

With the availability of repair help limited because of “Covid-19 and everything else,” Cormier said, the holes in his house had yet to be fully patched when the snow, sleet and freezing rain showed up.

“This is the coldest that it’s been in my lifetime,” he said. “This is number three of three big disasters for us.”

Rural areas were especially hard hit. Stafford Shurden, 47, a farmer and restaurant owner in the Mississippi Delta, has done everything he could to keep the well his family relies on for water from freezing.

But with temperatures forecast to drop into the single digits on Monday night, all he can do now is watch and wait.

“Where I am in the Delta, there are no trees so it’s just like wide-open tundra today,” he said.

“It’s just the full brunt of the wind out there.” In Austin, Diana Gomez said she and her boyfriend were about to go to sleep about 2 in the morning Monday when the lights in their apartment flickered off.

More than 12 hours later, their apartment building and much of the surrounding neighbourhood were still without power. Gomez said that she and her boyfriend worried about what would happen after nightfall, when the apartment darkened and the temperatures continued to plunge.

“I’ve never gone through a situation like this before,” Gomez, 31, said as the temperature in her apartment hung around 12 deg C. “I feel very frustrated. I feel very confused. And cold.”