After the 2008 crisis, households and firms spent years rebuilding their finances in what economist

Richard Koo
dubbed a “balance-sheet recession.” Debt levels have jumped again this time round, but on closer reading, the books tell a more positive story.

Due to Covid-19, the borrowings of U.S. nonfinancial companies were 8.5% higher at the end of September than a year earlier, when they were already above the 2009 peak both in absolute levels and as a percentage of gross domestic product. Some publicly-backed programs won’t need to be paid back in full, but many investors are still worried.

They can afford to relax. Balance sheets are about assets as well as liabilities.

Flow-of-funds data recently published by the Federal Reserve shows that companies have accumulated even more cash than debt this year: Their liquid assets were up 25% in the third quarter. On a net basis, debt was down 7.9%. Relative to GDP, it remains well below 2007 levels.

Back then, companies and families started a long process of deleveraging that slowed the economic recovery. In the U.S., it took nine years for households to consistently increase their net debt again.

This process is now happening at an accelerated pace. Car maker
Ford,
for example, drew on credit facilities in March and was downgraded into “speculative” territory by ratings firms. Yet as the year progressed it improved its net-cash position relative to 2019.

One reason is that most of the money raised didn’t ultimately need to be spent. Debt issuance was front-loaded in the spring and hasn’t been as strong since, figures by Dealogic show. The cash is starting to be used to pay dividends again.

Another is that the public sector absorbed the hit. Despite the surge in joblessness, expanded unemployment benefits and other government outlays have boosted incomes. On average, families haven’t been forced to take on extra debt or run down their financial portfolio holdings, Fed data shows. Nor are property and asset prices tanking, hitting households’ net worth as they did in 2008. So consumers have kept spending when they could. 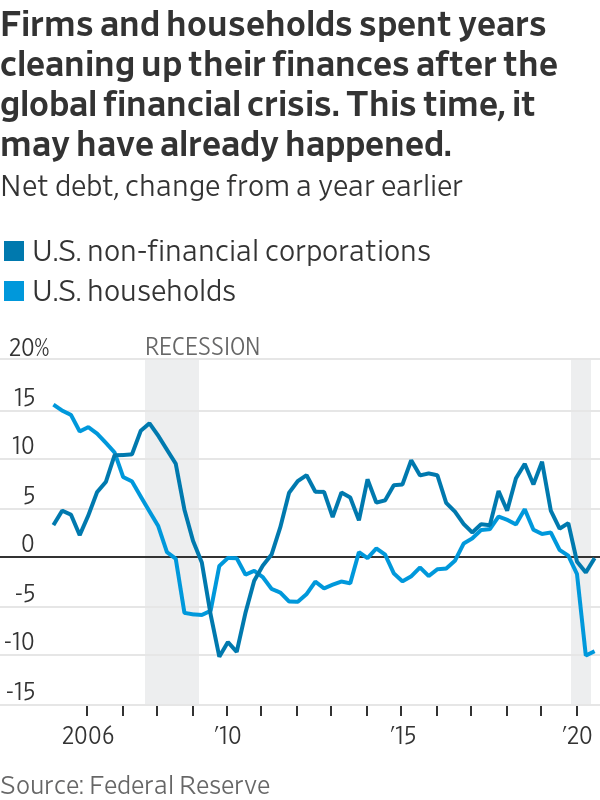 Ford reported bumper third-quarter results thanks to a jump in truck sales. Some pandemic winners like
Microsoft
and
Johnson & Johnson
—the only two U.S. companies with a top AAA rating—have both increased liquid assets and paid down obligations.

Economic scarring is still a concern, given that 2.5 million Americans have joined the ranks of the long-term unemployed and a second Covid-19 wave is under way. Also, aggregated numbers only say so much: Many households and firms are still struggling. Issuance of high-yield corporate debt has remained high, suggesting that a good deal of “junk” firms still need money.

Most important now is that governments don’t get scared by their own debt piles and roll back activist fiscal policy. Encouragingly, U.S. lawmakers seem closer to approving a new $900 billion spending package. It helps that there is now the prospect of an end to the crisis as vaccines are rolled out. 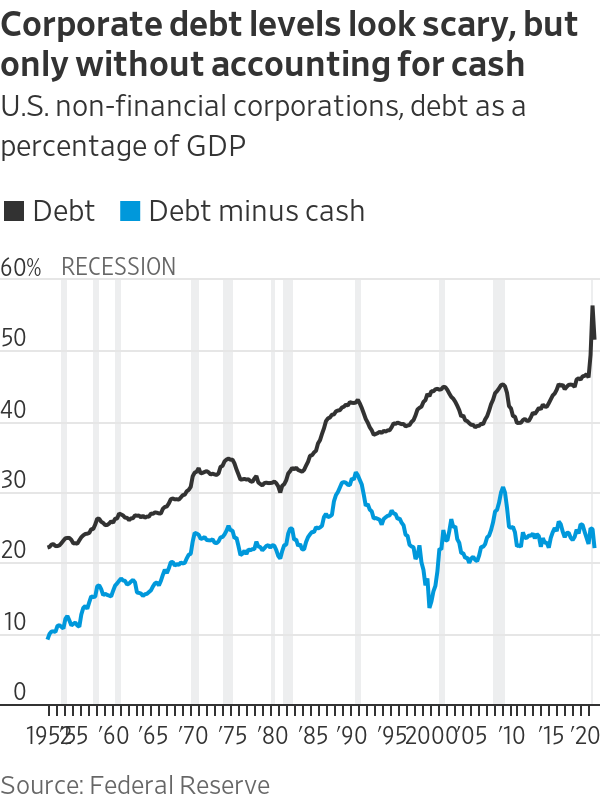 Investors can bet against a balance-sheet recession in the U.S. and the global economy, even if they don’t believe in a post-pandemic boom, through the corporate-bond market. The net debt of its biggest segment, made up of firms rated just one step above “speculative”, is lower than in 2019, figures by S&P Capital IQ suggest. Even with yields at all-time lows, their paper seems a good alternative to government debt.

Whether future income statements from U.S. Inc. will be as strong as the market expects remains to be seen, but at least its balance sheet shouldn’t be a big concern.