Fast-food workers in LA face unmasked customers and unsafe workplaces, and are punished for speaking up about COVID-19, a damning new report says

Investors bidding up newly public shares of
DoorDash
and its competitors shouldn’t take for granted the historically fragile relationship between food-delivery platforms and the restaurants they serve.

While it is unclear just how sticky eaters’ business will be on delivery apps once the coronavirus pandemic ends, their loyalty could in many cases depend upon whether their favorite restaurants stay around. That is hardly a guarantee.

Delivery platforms have been essential to the survival of many restaurants this year, bringing them business even while their dining rooms have remained closed down. In addition to offering grants and relaxed delivery fees in some cases, the platforms have been working to use the pandemic as an opportunity to prove their long-term value to restaurants, many of which had once scorned their services because of high commissions or questionable business practices.

Would you stop using a delivery platform if your favorite restaurant was no longer on it? Why? Join the conversation below.

DoorDash similarly seems to have added something like 50,000 merchants in the several months before its initial public offering filing alone. And although its early growth may have been in part fueled by facilitating deliveries without prior consent of restaurants, according to D.A. Davidson analyst Tom White, DoorDash now says partner merchants account for nearly all the platform’s gross order value.

But attrition could be coming. Some of this year’s restaurant growth seems to have come courtesy of local regulators, who have enacted temporary caps in many geographies on commissions that platforms can charge for their services. Some caps, including those in major cities such as New York City and San Francisco, are well known by investors, but the details of each individual regulation are more esoteric. Philadelphia’s ordinance, for example, is particularly tough on delivery platforms, capping delivery fees at 10% of the purchase price of an online order. 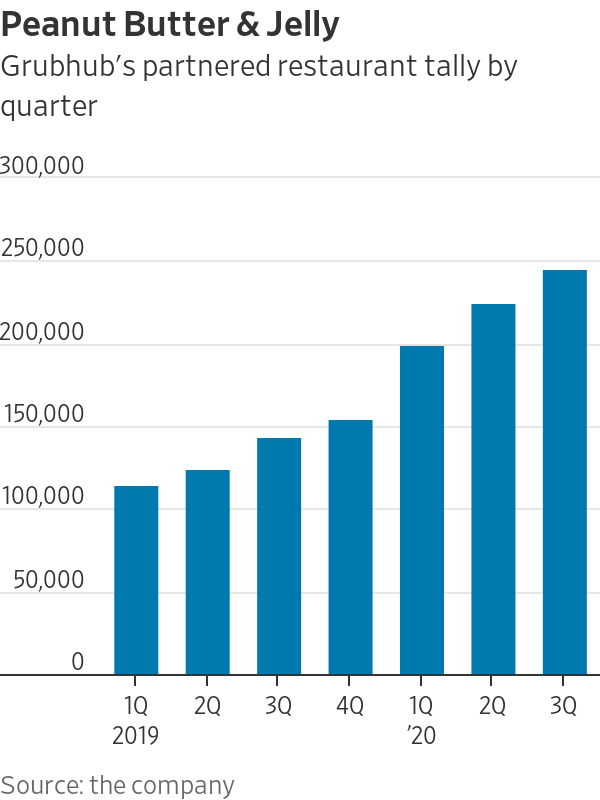 Also underappreciated are caps in smaller metro areas and suburbs, which have increasingly popped up. Earlier this month, Berkeley, Calif., for example, lowered its commission cap on delivery fees to 10% from a previous cap of 15%. Before the pandemic, delivery platforms frequently charged restaurants up to 25% or more in total fees.

These caps are set to expire at various times once restaurants reopen and the pandemic has eased. At that point, it is likely that delivery platforms, which haven’t put up consistent profits this year, will hike commissions back up. In urban areas, where discovery and delivery may be less necessary, the additional fees could cause restaurants to rethink the value each platform provides. That could put platforms such as Grubhub and Uber Eats, which have a stronger presence in Tier 1 cities, at greater risk.

Prabir Adarkar
said he believes its platform has demonstrated its worth to merchants amid the pandemic, acting as a lifeline to many of them, and therefore expects them to remain on board even after the pandemic ends.

Ghost kitchens are popping up all over the U.S. as food delivery soars and dining at restaurants plummets amid the pandemic. These businesses, which can host food preparation for multiple restaurants at a single location, are attracting interest from investors and restaurateurs. Photo: Adam Falk/The Wall Street Journal[object Object]

But once all restrictions on in-person dining are lifted, the balance of power could shift. Big national chains in particular won’t need as much help from online platforms in a more normal world. This matters because, according to Grubhub’s 2020 “Year in Food” report, all of the top 10 trending dishes this year are items commonly ordered from big household chains, such as a spicy chicken sandwich or a chicken burrito bowl.

Is an iced latte 157% more popular on Grubhub this year because the app featured a previously unknown cafe, or simply because fewer people walked by a Starbucks? Investors awaiting the delivery of their own daily caffeine fix need to be asking themselves this very question.

Write to Laura Forman at laura.forman@wsj.com