US expected to sanction Russians over Navalny poisoning: Sources

Walt Disney Co.
only seems like a cautious company.

Fairly new to the streaming world, the entertainment giant has caught on quick. Disney+, its first streaming service under its flagship brand that only launched last November, now has 86.8 million paying subscribers. That’s about where the company first thought it would land after five years, and the success of the effort has convinced Disney to rethink its priorities—and pour some gas on the fire. The company announced late Thursday that its new target for Disney+ is a range of 230 million to 260 million paid subscribers by the end of its fiscal year 2024.

Even streaming pioneer
Netflix
hasn’t reached close to that level yet. And if you factor in Disney’s other streaming properties like Hulu and ESPN+, the company sees the full base of paid subscribers for its direct-to-consumer offerings hitting a range of 300 million to 350 million by September of 2024. Wall Street analysts currently expect Netflix’s global subscriber base to just be crossing the 300 million mark by that time, according to consensus projections tabulated by FactSet. 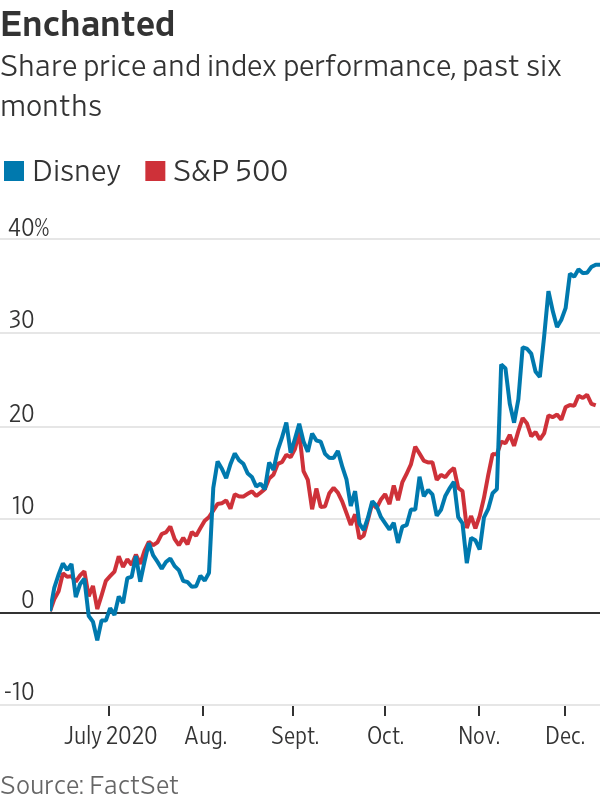 It is an ambitious goal, and hardly a sure thing, especially since both Disney and Netflix can chalk up a good deal of their recent success to the pandemic that has shuttered movie theaters, theme parks, restaurants and other entertainment options. Netflix has explicitly warned investors that much of its recent growth was likely pulled forward from future periods. And while Netflix is a streaming-only company, Disney made clear at a four-hour investor event Thursday that it is not throwing in the towel on theatrical movies. The company maintains plans to release big-budget movies next year and beyond from its properties including Star Wars, Marvel, Pixar and Disney.

But Disney now has a lot of ways to play both sides of the fence. The company previewed several shows and movies from its blockbuster franchises coming to Disney+. This includes a full Star Wars movie called “Andor” from Bourne movies screenwriter Tony Gilroy, coming in 2022. It also has several series coming from its Marvel universe, while its ownership of the old Twentieth Century Fox business and channels such as FX give the company plenty of material to appeal across audience types. The success of Disney+ gives the company options to stay flexible, contrasting with a recent move by
AT&T’s
WarnerMedia division to move the full slate of its Warner Bros. theatrical movies targeted for next year to its HBO Max service, which has seen much lower adoption.

Disney’s streaming push still won’t be cheap. The company is sticking with its prior goal of having its direct-to-consumer business turn profitable by the end of fiscal 2024, despite now projecting a much larger base of projected subscribers by that time. Disney expects to reach a level of releasing 100 shows and movies for streaming each year, many of which will be Marvel and Star Wars shows that won’t be cheap. But investors have been effectively cutting Disney a blank check for streaming lately anyway, sending the stock up 24% just since the company announced a management reorganization in mid-October to focus more on streaming. It’s hard to blame Disney for cashing it.

Write to Dan Gallagher at dan.gallagher@wsj.com

Amazon's next CEO and other tech execs...

US expected to sanction Russians over Navalny...