Credit Suisse Group AG’s
new chief executive said managing rich people’s money will be a priority for the bank, setting a target to boost wealth-management profits by at least a quarter in the coming years.

Thomas Gottstein,
who took over the bank earlier this year after a spying scandal rocked its executive ranks, said the bank would allocate two-thirds of its capital to wealth management and one-third to investment banking. The split between its two main businesses continues the strategy set out by his predecessor,

Tidjane Thiam,
who was forced to resign in February over a spying scandal.

The outlook was part of Mr. Gottstein’s first strategy presentation to investors, which took place Tuesday. Credit Suisse said fourth-quarter performance has been strong in both wealth management and investment banking. Both segments have had a solid year as markets were supported by unprecedented central bank and government relief measures.

Credit Suisse has struggled in the past to convince investors that its formula of balancing the steady business of wealth management with more volatile investment banking will succeed over the long term. Its share price has lagged behind that of crosstown rival
UBS Group AG
both in performance and valuation. In terms of size, it is dwarfed by U.S. banking giants such as
JPMorgan Chase
& Co and
Morgan Stanley. 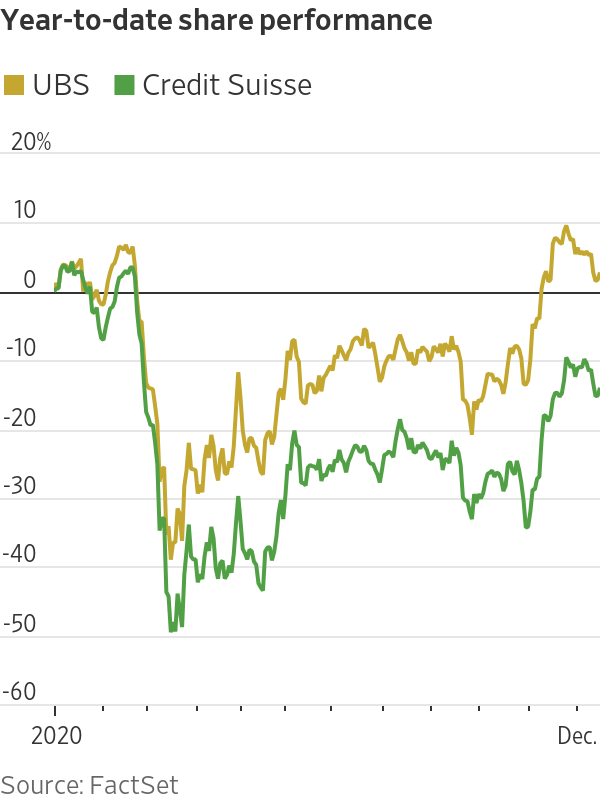 The possibility of a merger between Credit Suisse and UBS, a subject of perennial speculation, was rekindled earlier this year when UBS said it had studied the matter as a way for both the banks to cut costs and stay competitive.

To woo wealthy clients, Mr. Gottstein will have to overcome the reputational challenges he inherited. His presentation didn’t directly address the spying scandal and other mishaps that plagued the bank this year. It came under fire after its chief operating officer and security chief hired private investigators to follow two executives last year. The bank ousted Mr. Thiam for failing to contain the fallout. Last month, The Wall Street Journal reported a law firm hired by the bank found two more employees had been put under observation previously.

In November, Credit Suisse said it expects to take a $450 million impairment on an equity stake it holds in hedge-fund manager York Capital Management, after York narrowed the scope of its operations. The bank said this month it may take a separate provision, for an undisclosed amount, as part of a U.S. civil court case over residential mortgage-backed securities it marketed to investors before the 2008 financial crisis.

Investment products sold by the bank also ran into trouble this year. A set of supply chain finance funds were reviewed for potential conflicts of interest among fund investors and companies receiving financing. Collapsing values on some of its exchange-traded notes caused heavy losses for investors.

Its role in marketing securities tied to shares in
Wirecard AG
before the fintech company’s collapse in June also came under scrutiny.

“Mistakes can and will always happen, but we have no tolerance for unprofessional behavior,” Mr. Gottstein said, outlining his “core beliefs.”

He said he and his team want to be transparent and address legacy issues, “thereby avoiding surprises.”

A pre-markets primer packed with news, trends and ideas. Plus, up-to-the-minute market data.

Mr. Gottstein said his primary objective is to create value for shareholders and post returns on equity above the bank’s cost of capital—a baseline that many banks, including Credit Suisse, have struggled to meet in recent years.

The wealth management business, with clients ranging from technology entrepreneurs to large family offices, made around 4 billion Swiss francs in pretax profit in the 12 months to Sept. 30., equivalent to $4.5 billion. Mr. Gottstein said the aim now is to raise its annual pretax profit in wealth management to between 5 billion francs and 5.5 billion francs in 2023. Most new capital will be earmarked for the business, the bank said.

Write to Margot Patrick at margot.patrick@wsj.com