When the pandemic shut down the economy this spring,
Walmart Inc.
all but closed the department where

Christina Rogers
works as an optician. Her children’s schools closed, too. She thought she might have to dip into savings as they hunkered down in St. George, Utah.

Instead, her financial situation improved.

Though her earnings dropped when she cut back hours to look after her children, company bonuses and a federal stimulus check put extra money in her pocket. She bought stocks right before the market roared back this spring and refinanced her mortgage as interest rates plummeted.

The coronavirus crisis has unfolded in ways few could have expected. Bankers, consumer advocates and, yes, journalists, assumed that when the economy fell apart in March, Americans’ finances would, too. Many recalled how the last financial crisis knocked millions of people off their feet.

This crisis is nothing like the last one. But, with the benefit of hindsight, it is becoming clear just how much the 2007-09 recession shaped the coronavirus recovery.

So far Americans have, on average, managed quite well. They paid down credit-card debt and saved more. Their household net worth jumped to record highs, aided by the stock surge. Their credit scores went up.

Yet those encouraging statistics mask an increasingly unequal economy. Millions of Americans are out of work and facing permanent job losses. More people are going hungry. Hundreds of thousands of small-business owners have closed shop. Legislation to extend many of the government’s relief efforts is still awaiting President Trump’s signature. 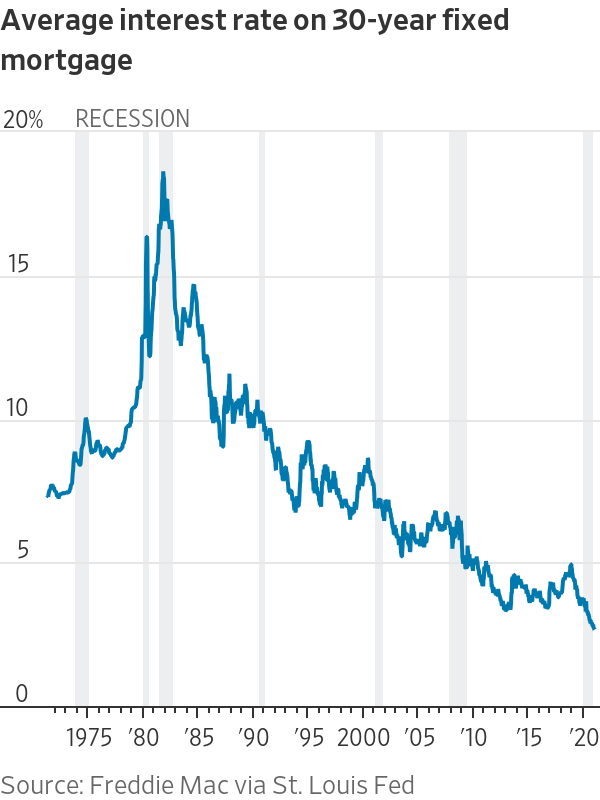 “The averages are certainly true but there are a lot of folks who are more vulnerable,” said Ray Kluender, a professor at Harvard Business School who studies household financial distress. “They have certainly been trending in the wrong direction.”

The last crisis—and the lessons learned from it—set the stage for the response to this one.

When financial markets went haywire in March, the Federal Reserve unleashed a series of monetary stimulus measures inspired by the earlier crisis—but magnitudes larger and faster. Those programs kept large companies solvent and added a helping hand in the stock market’s return to record highs.

The bailouts and stimulus of the last crisis primed the pump for Congress to act quickly when the pandemic hit. Then, the aid was targeted at businesses—namely, banks and auto makers—that were nearing collapse. Help for consumers largely came through payroll tax cuts, expanded unemployment and food stamps.

Financial Impact of the Pandemic

This time, lawmakers rushed to get money to nearly every American and a wider swath of business. The government cut checks, expanded unemployment benefits further and wrote forgivable loans to small businesses. The $2 trillion stimulus package in March propped up the economy when businesses and consumers couldn’t.

The government also offered homeowners generous mortgage forbearance—up to a year of paused payments—enabled because it backs most home loans made in recent years. That allowed it to head off a 2008-style housing bust. 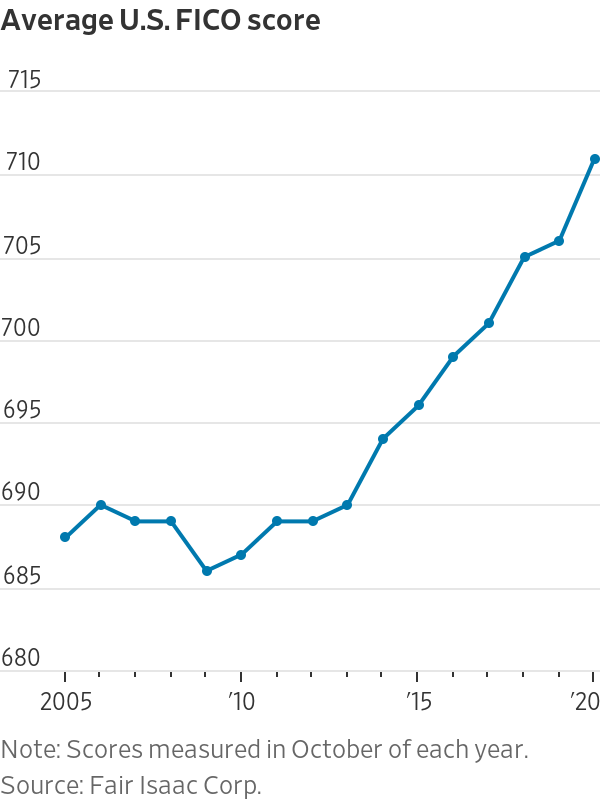 Banks and other financial institutions were the villains of the last crisis, accused of inflating the housing bubble. This time around, they were eager to look like the good guys. They rolled out plans to help borrowers pause debt payments and waived fees and other charges for a time.

They were in a better position to offer those benefits. Stiff regulations imposed after the financial crisis pushed them to curtail risk and build up robust reserves of capital to deploy when an emergency hit.

Many consumers also changed. Burned a dozen years ago by the bubble in the residential property market, they now managed their money more prudently. The average credit score had been steadily increasing and continued to rise as the recession took hold, according to
Fair Isaac Corp.

Around 2008, Ms. Rogers, the Walmart employee, was getting out of a marriage that had left her and her ex-husband in debt. She grew up poor and sometimes used a neighbor’s house to shower, she said. Saving money wasn’t a focus. “I was in a financial crisis my entire life,” she said.

After the divorce, she prioritized paying down her credit-card debt and building up her savings. By 2010, she had put enough aside for a down payment on a house, where she lives with her partner and children.

Years of financial restraint left her in a strong position come March. The Walmart optical department where she works effectively closed temporarily, but she transferred to the pharmacy. When stocks nosedived, she opened investment accounts for her children. She refinanced her mortgage in late spring, getting a 20-year loan with an interest rate of just over 3%.

Financially, the crisis “didn’t affect me too much, except being able to take advantage of things,” Ms. Rogers said.

Bank executives have spotted shifts in customer saving and spending habits in checking- and savings-account data.

During the last crisis, people used stimulus checks and tax breaks to make big purchases like TV sets and cars. But when this crisis hit, many were more measured.

How has your financial situation changed in 2020? Join the conversation below.

For those who did increase spending, it was often for everyday items like food and home improvement. It helped that Americans had fewer places to spend. Eat-in restaurants and entertainment venues shut down. Traveling was off the table.

“People took more responsibility to use the money for what it was intended—let me reduce risk, pay down debt,” said

That was one of

Joe Ormiston’s
first moves. He lost his job as a bartender when the Nashville, Tenn., sushi restaurant where he worked closed in March, then shut permanently. Expanded unemployment benefits, plus a stimulus check, pretty much replaced his income. 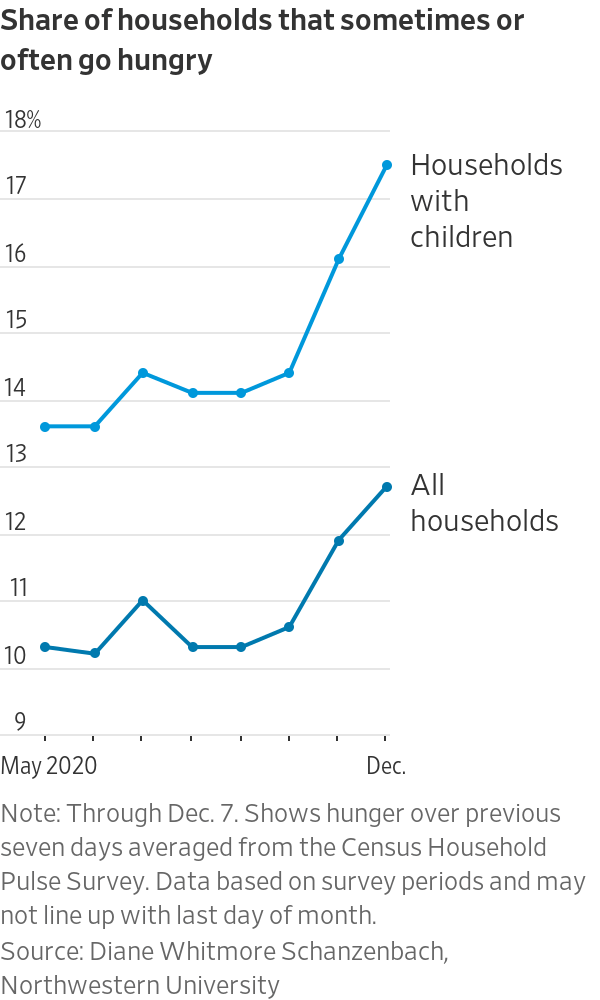 Once the government benefits came through, he stopped using his credit card and paid off his $600 balance. He didn’t want the debt hanging over him during an uncertain time, he said.

“Not having a job, not knowing what’s going on, at least it’s something I can control,” he said.

Families who lost jobs but received government benefits fared pretty well for the first few months of the recession, according to a
JPMorgan Chase
& Co. Institute analysis of the bank’s account and credit-card data. At first, bank-account balances swelled, but the median household spent down much of those funds as the pandemic dragged on and expanded unemployment benefits lapsed over the summer. The lower their income in 2019, the more their balances dropped.

After Mr. Ormiston’s expanded benefits expired, his weekly unemployment check dropped to about $250 a week. It recently stopped altogether. He has spent about a quarter of the $20,000 he was saving for a down payment on a home and is using his credit cards again. Finding it difficult to get a new job, he enlisted in the Navy Reserve. Boot camp starts early next year.

While consumer purchases have picked up in recent months, localized spending patterns haven’t returned to normal. One example: Spending dropped the most in the wealthiest neighborhoods as white-collar workers sequestered at home, according to John Friedman, an economist at Brown University.

Robert Brett Apparel, a men’s clothing store in Fox Point, Wis., has felt the shift. Normally, a steady stream of Milwaukee-area executives and financiers would come in for custom suits, trousers and sport coats. Even during the financial crisis, people still needed to dress up. But since March, the calendar has been mostly empty.

“It’s a completely different thing in terms of just how severe and absolute it was,” said

Bob Richards,
the store’s owner and sole employee. “Can you spend money on something you don’t really need and definitely aren’t going to use for a while?”

Mr. Richards got a Paycheck Protection Program loan and a state grant. But he had to close his storefront; he will continue through direct sales. His family of five has dug into savings and his retirement account. They got a forbearance on their mortgage and are stretching their groceries. 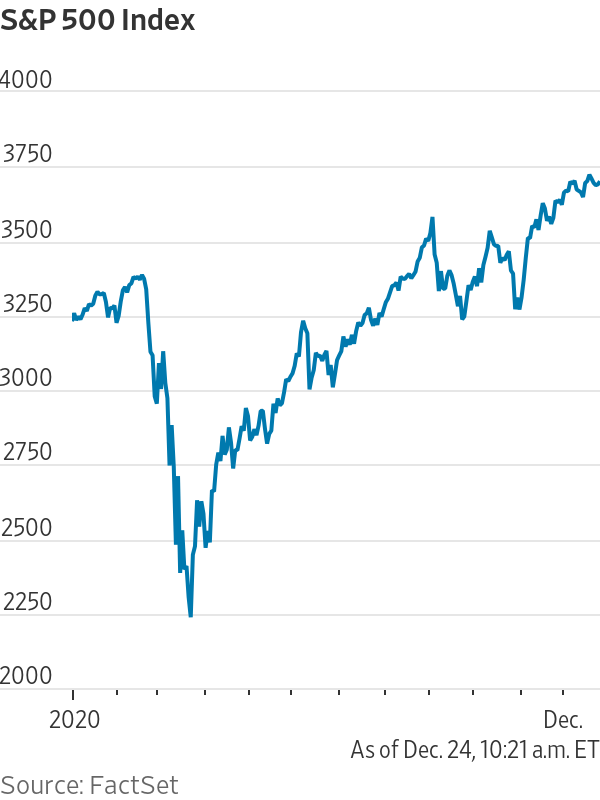 It isn’t clear where Americans’ finances are headed. Congress has recently passed—but President Trump has yet to sign—another stimulus package that would give people on unemployment an extra $300 a week. Many would also receive $600 stimulus checks, and moratoriums on evictions would be extended through the end of January. The small-business loan program would reopen. Mr. Trump has said the $600 payment is insufficient and hasn’t committed to signing the bill.

If unemployment remains elevated longer than the stimulus is in effect, the economy’s dividing lines could deepen, said Peter Ganong, a professor of public policy at the University of Chicago.

“We might end up in an unforced error in a way that is similar to the Great Recession,” Mr. Ganong said.

Write to Ben Eisen at ben.eisen@wsj.com