China Chengxin International Credit Rating Co. had an AAA rating on the miner when it failed to repay the equivalent of $153 million in short-term debt on Nov. 10. The default occurred just weeks after the company, Yongcheng Coal & Electricity Holding Group Co., raised the same amount from a sale of three-year-debt.

The series of events spooked investors, triggering price declines that pushed up bond yields and raised borrowing costs for other companies.

Chengxin has been suspended from rating new interbank bond issues for three months, the NAFMII said. It also faulted the credit rater’s internal controls and ordered the company to conduct “comprehensive and profound rectification.”

Chengxin said it has accepted the regulator’s decision and will take corrective action. Bond raters typically collect fees from companies when they rate new bond issues.

China’s $4.8 trillion onshore corporate bond market has two subcategories; the larger and more liquid one is known as the interbank market and is regulated by the People’s Bank of China. The other is the exchange-traded bond market, overseen by the country’s securities regulator.

Moody’s Corp.
owns 30% of Chengxin, which has the biggest market share among rating companies in China. The Beijing-based firm rated 1,381 bonds in the third quarter of this year, representing slightly more than a third of the deals during the period, according to NAFMII data. Chengxin also had AAA ratings on a few other companies that defaulted recently, including Tsinghua Unigroup, a large government-backed chip maker.

The penalty on Chengxin is the first outcome of a string of investigations into securities firms, accounting firms and corporate issuers that were involved in the recent series of debt defaults. The China Securities Regulatory Commission is also looking into suspected legal or regulatory infractions in the Yongcheng default.

Chinese regulators have tried to act swiftly to reassure investors that the recent defaults are isolated events caused by bad actors, rather than an indication of systemic problems across the bond market. In late November, a high-level committee overseeing financial stability and development said it would show zero tolerance for misconduct among market participants.

In the wake of the recent defaults, some Chinese companies had to pay higher interest rates to sell new bonds. Yields on three-year AAA-rated bonds have recently come down, while those on lower-rated issues remain somewhat elevated, according to Wind data. 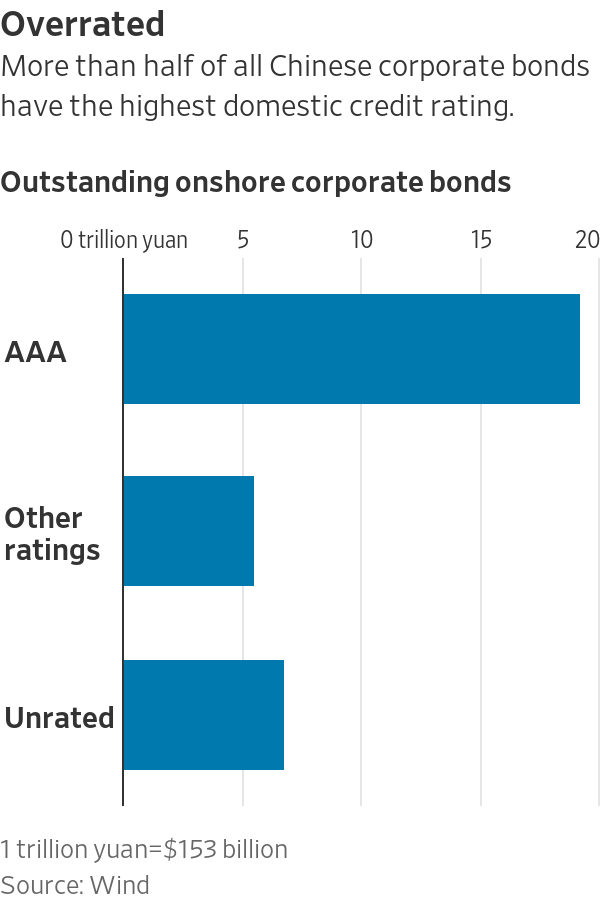 Domestic rating firms in China have given the vast majority of corporate bonds their highest possible AAA grade, which connotes minimal default risk, and the percentage of debt with this rating has climbed in recent years.

Some analysts said the penalty on Chengxin was mild in comparison to a yearlong ratings suspension imposed on one of its rivals, Dagong Credit Global Rating Co., which was barred in 2018 from rating bonds in both the interbank and exchange-traded bond markets. At the time, regulators criticized Dagong for poor internal management and for taking high consulting fees from clients. The firm’s business was badly affected, and Dagong was taken over by the state last year.

Xing Zhaopeng, an economist at ANZ, said Chinese credit ratings have for years given their client generous ratings, but tend to ignore problems due to their lack of internal controls.

“The punishment against the market leader is sending a strong signal that China will strengthen enforcement to crack down on wrongdoings by rating agencies, urging the latter to shoulder bigger responsibilities in curbing risks on the credit market,” he said.

Write to Xie Yu at Yu.Xie@wsj.com

Brits are calling out the 'dystopian' and...

Brits are calling out the 'dystopian' and 'post-apocalyptic'...

Brits are calling out the 'dystopian' and 'post-apocalyptic'...