AstraZeneca’s
$39 billion splurge to acquire
Alexion Pharmaceuticals
looks like a winner—as long as it can hang on at that price tag.

The European pharmaceuticals giant said Saturday it would acquire the rare-disease specialist for $175 a share, with just over one-third of that payable in cash and the remainder in stock. AstraZeneca is paying a 45% premium to Alexion’s Friday closing price.

The deal has obvious benefits for both sides. AstraZeneca’s big prize in this deal is the blood disorder treatment Soliris, which generates roughly $5 billion in annual sales. That would rank right alongside the cancer drug Tagrisso as one of the company’s bestselling products. Competition for Soliris is unlikely to reach the market for several years, and rare-disease patients have historically been reluctant to switch treatments, even if a drug with superior data reaches the market. 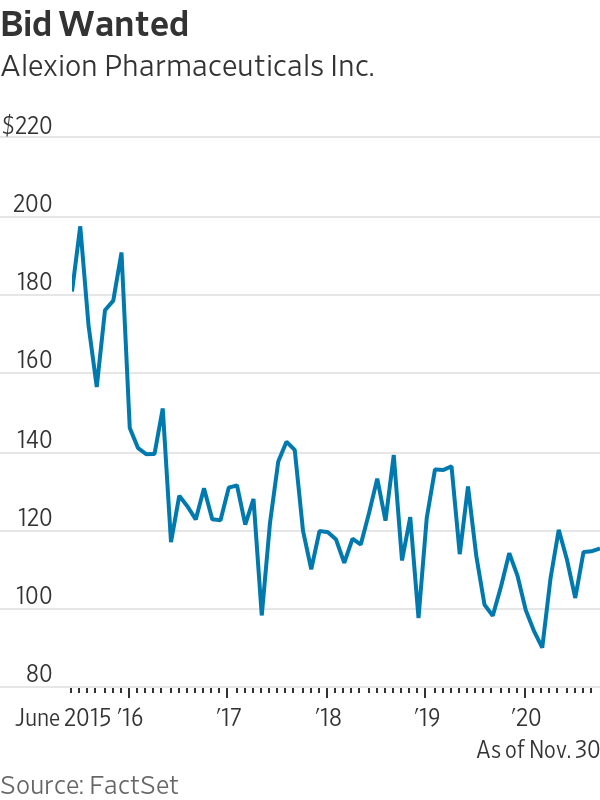 Much of the public attention that AstraZeneca has received recently has surrounded its Covid-19 vaccine candidate, but it is unlikely to be a significant part of company sales for a long time. Alexion is far more material. AstraZeneca expects the deal to increase earnings per share by at least 10% over the next three years. The company also said that the acquisition “supports” its “progressive dividend policy,” signaling a higher payout eventually.

As for Alexion, its stock price is down 40% since its 2015 high, despite those huge cash flows. Drug companies with one product accounting for the majority of their sales tend to trade at low earnings multiples. In the case of Alexion, Soliris accounts for more than 80% of 2020 estimated revenue. Its shares fetch just 10 times this year’s adjusted profit forecast. By that logic, an asset like Soliris is more valuable to a larger, more-diversified company like AstraZeneca, in the eyes of Wall Street.

The first word on what Wall Street is talking about.

But while the deal seems unlikely to run afoul of antitrust regulators, AstraZeneca shareholders shouldn’t count on that extra dividend boost just yet. Alexion could be attractive to other suitors, too. After all, the drug industry has no shortage of large companies with long-term growth challenges but fat wallets. And the deal price announced on Saturday is fairly light on cash. An interested bidder shouldn’t have trouble exceeding that, though Alexion will owe AstraZeneca a break fee of $1.2 billion in such a scenario.

“In today’s inflated market we believe investors could demand more,” from AstraZeneca “or another acquirer,” wrote SVB Leerink Analyst Geoffrey Porges in a note to investors on Saturday.

As such, investors should be carefully watching Alexion’s stock price when trading resumes on Monday. The stronger it performs, the more likely it is that AstraZeneca Chief Executive Officer

Pascal Soriot
will have to sweeten the deal.

Write to Charley Grant at charles.grant@wsj.com