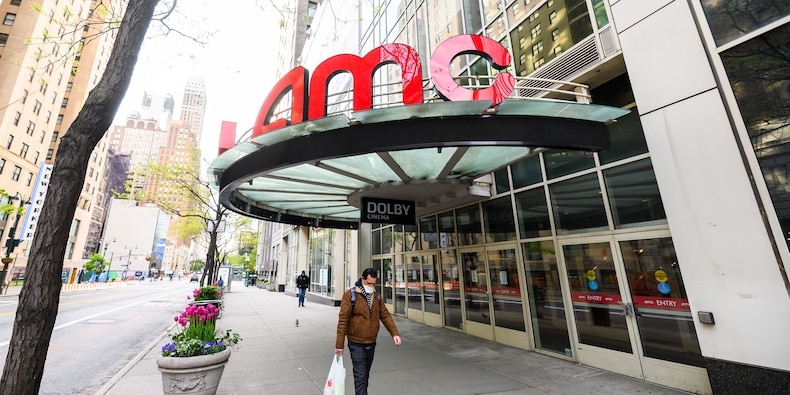 AMC Entertainment surged as much as 15% in early Tuesday trading as retail investors banding together in online forums returned to the struggling theater chain.

The world’s biggest movie-theater company saw its stock price skyrocket in late January as traders in Reddit groups including r/wallstreetbets piled into highly shorted stocks. Shares soared as high as $20.36 on January 27 before plunging back to earth as the day-trader phenomenon fizzled out.

Tuesday’s price action suggests the crowd of casual investors is still somewhat in it. The gains placed shares at their highest in about a week. Posts on Wall Street Bets hailed AMC as a top recovery play and praised the company’s recent stock sales as a key lifeline. Vaccinations and economic reopening could revive AMC from its virus-induced downturn, Reddit user u/ImFedUpWithItAll said in a post detailing his bullish thesis.

“I’m not Buffett so I’m not buying for life. I’m in this for the rally to normalcy,” they added.

Read more: GOLDMAN SACHS: These 40 heavily shorted stocks could be the next GameStop if retail traders target them – and the group has already nearly doubled over the past 3 months

The theater chain was among the few companies able to convert extraordinary retail-trader demand into a stronger balance sheet. The company raised more than $300 million last month by selling shares during the Reddit-trader rally. When coupled with a $411 million credit line, the fundraising efforts took bankruptcy talks “completely off the table,” CEO Adam Aron said in a statement.

To be sure, locations in key markets including California and New York remain closed as COVID-19 cases rise across the country. The halt to regular operations endangered the company earlier in the pandemic and forced warnings of extinguished cash reserves.

Daily COVID-19 case counts have since fallen, prompting investors to shift back into so-called reopening sectors including travel, leisure, and entertainment.

Read more: UBS says bitcoin is a bubble and too volatile to diversify a portfolio, unlike gold – here’s why the bank says it could end up ‘worthless’