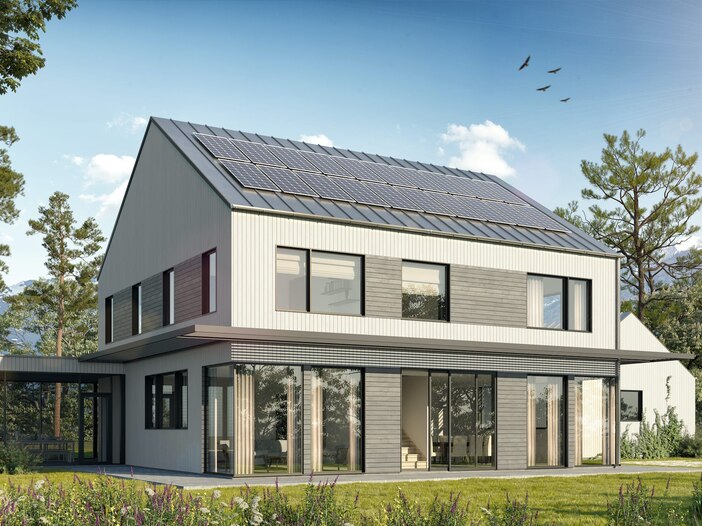 Plant Prefab, a prefab home maker that saw massive growth during the COVID-19 pandemic, has launched the Passive House LivingHomes, a line of three environmentally friendly homes for families.

Read more: Developers have zero incentive to fix the affordable-housing crisis. Here’s what one real estate exec thinks could change that.

In general, prefab homes have often been considered the solution for creating affordable and sustainable housing units, and the space has recently seen an increasing amount of interest from the public.

“Our focus is building homes that are as sustainable and healthy as possible,” Steve Glenn, Plant Prefab’s founder and CEO, told Insider in an interview. “We’ve had more LEED Platinum homes certified than almost any other design firm, way more than most any other prefabricator.”

What even is a “passive home”? 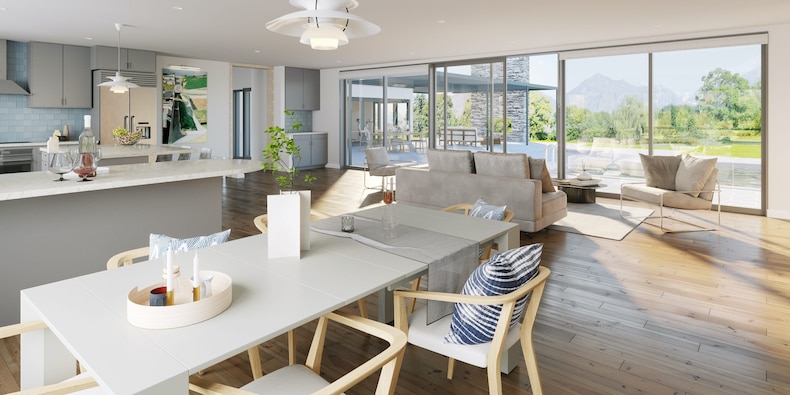 Plant Prefab tries to “wed profit and purpose,” and has always been interested in building to the passive house standard, Glenn told Insider.

Meeting these standards involves optimizing a unit to be energy efficient. To be certified by the Passive House Institute US and Passive House International, the homes need to use 80% less power for heating and cooling than a typical building and are meant to be “healthier and more comfortable” to occupy, according to Plant Prefab.

To do this, home makers need to implement correct solar orientation, good insulation and ventilation, and “performance” windows and doors.

As a result, Plant Prefab’s new homes all have a fresh air system, efficient water heaters, an energy or heat recovery ventilator, insulation, and strong windows and doors.

The homes are also built using Plant Prefab’s “Plant Building System,” which uses the company’s proprietary panels and modules to create an entire home in a flexible and efficient manner.

“By building in a controlled off-site environment, we can build more efficiently with respect to time and cost,” Glenn said. Plant Prefab began the new passive homes project in 2020 during COVID-19. This also coincided with the company’s best year on record as people moved from bustling cities to quieter areas or into a “second home community.”

Earlier on during the coronavirus pandemic, Plant Prefab never saw a downturn period even when other companies started struggling. Interest was so high throughout the year, Plant Prefab had to start turning away business.

Now, Plant Prefab is looking to expand its factory space.

Take a peek inside the three Passive House LivingHomes

The public has shown strong interest in Plant Prefab’s new passive homes since its unveiling about two weeks ago, although Glenn predicts the company won’t see many contracts in the following months since “homes aren’t an impulse buy.”

Now, let’s take a look inside the three units.

The RPA LivingHomes 1 and 2 have pitched roofs for solar panels, while LivingHome 3 was inspired by Californian and mid-century homes. All of the units have smart home technology from Amazon Alexa and at least three bedrooms, providing more space than a small city apartment for a family. 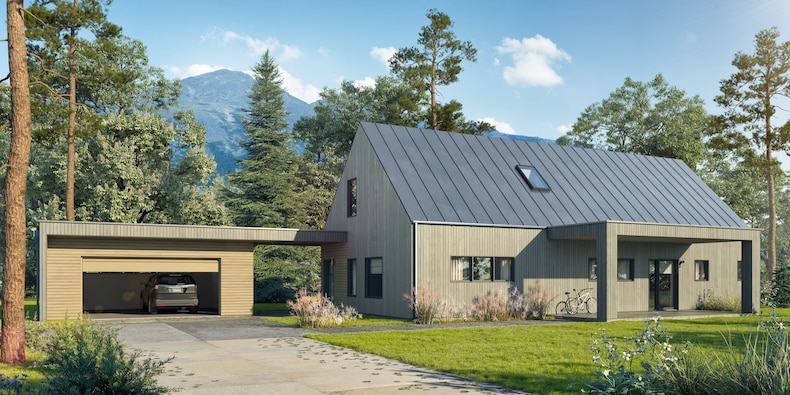 Like many modern homes, the kitchen, dining, and living room are all in an open space. The first floor also has a laundry room, two bedrooms, and two bathrooms. 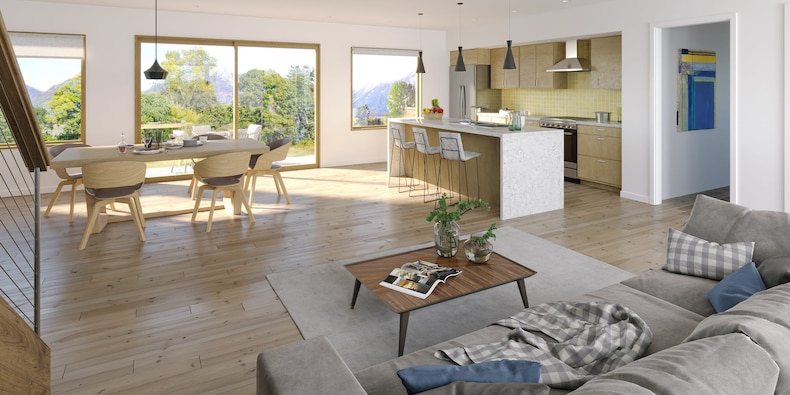 Heading up, RPA LivingHome 1’s lofted space has two bedrooms, a bathroom, and an extra room that be turned into a home office or a children’s playroom. 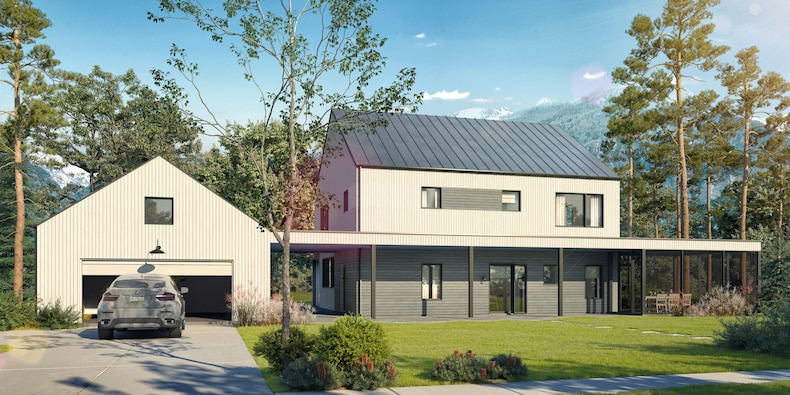 The home includes a front foyer, mudroom with laundry, and an open kitchen and dining room. Past the kitchen and staircase is RPA LivingHome 2’s living room, which then gives way to both the patio and a home office. 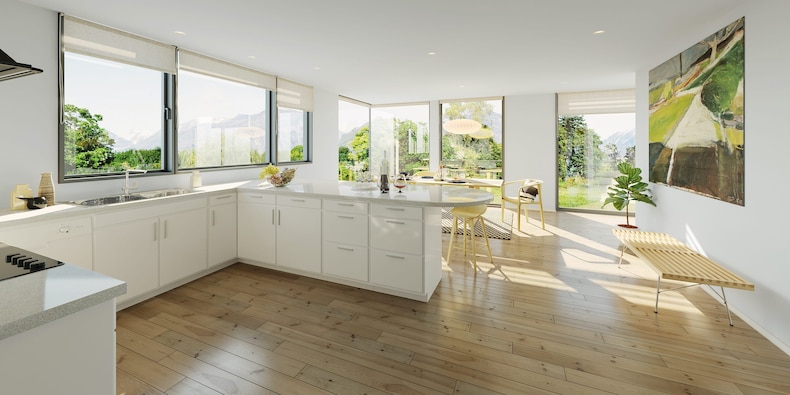 The primary bedroom with a master bathroom and walk-in closet are upstairs. There’s also an extra room for a home gym, an office, or an additional closet.

Down the hall from the primary bedroom are the two additional sleeping spaces and the other full bathroom.

Finally, the largest RPA LivingHome 3 sits at 3,182 square-feet with its four bedrooms, 3.5 bathrooms, and a garage. According to Plant Prefab, the unit has a “distinctly Californian design” and was inspired by homes from the 1940s to 1960s. Heading inside, the third model has a foyer and an open-planned kitchen, dining, and living room that leads into the patio. There’s also a home office for all the remote workers still stuck at home.

The laundry and powder room, bathroom, and two bedrooms are down the hall from the living space. The primary bedroom with a bathroom, walk-in closet, and access to the pool is at the end of the hallway for some extra privacy. 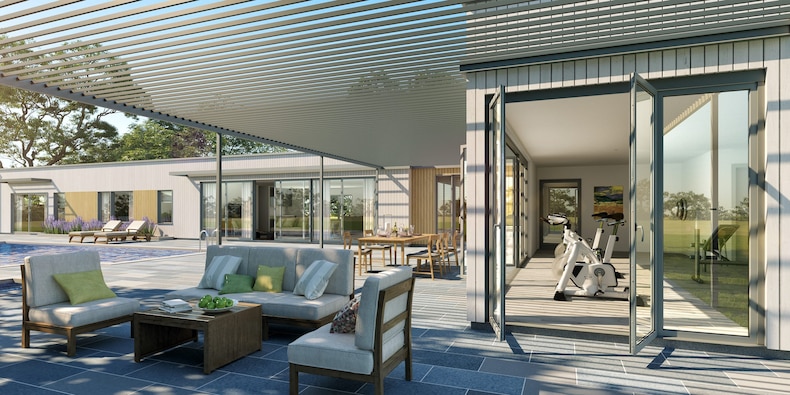 The home’s garage and spa can be turned into a larger home office or a home gym with a kitchen, bathroom, sauna, and steam room.

Moving away from the city for more fresh air? You’re in luck. The almost $877,00 home has the most outdoor space of all three models with both its pool and some extra room for a fireplace and a dining and seating area.